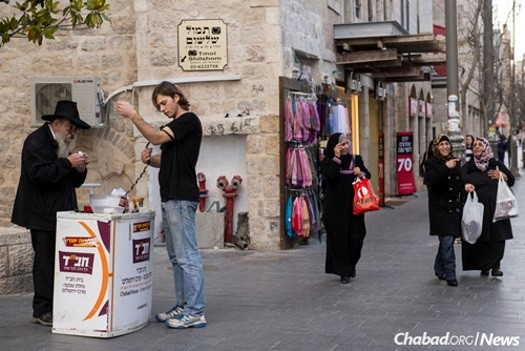 As a week of terror and stabbing attacks continued today inIsrael, the Chabad Youth Organization in Israel is sending out waves to volunteers—from students to seniors—to encourage men and boys over the age of 13 to put on tefillin prior to the start of the Jewish Sabbath.

They will do so, say officials of the group, known as Tzeirei Chabad, in light of instructions given by the Rebbe—Rabbi Menachem M. Schneerson, of righteous memory—who had issued a similar call during other dangerous times in Israel. Before the outbreak of the June 1967 war, for example, the Rebbe prompted an active campaign for Jewish males over 13 to perform the mitzvah of tefillin.

Wrapping tefillin is part of the Rebbe’s 10 mitzvah campaigns introduced between the years of 1967 and 1976. Called mivtzoim (“campaigns”) in Hebrew, these 10 mitzvahs formed the platform upon which the Rebbe’s far-reaching program to revitalize Jewish life and observance throughout the world was built.

“Then all the peoples of the earth will see that the name of the Lord is called upon you, and they will fear you.” (Deut. 28:10) The laying oftefillin instills fear in the enemy, according to the campaign, which encourages Jews to “call your friends right now, and tomorrow take a pair of tefillin with you and head out and campaign.” (Tefillin are not worn on the Sabbath.)

Rabbis around the country are also calling for an increase in Torah study, prayer, and acts of charity and kindness. One of the most famous sayings of the Rebbe, they note, is: “Action is the main thing.”

Terrorist violence over the course of the week has left four Israeli Jews dead—Rabbi Eitam and Na’ama Henkin, who were shot and killed while driving with their children in Samaria; and Aharon Benet and Rabbi Nehemia Levi, who were stabbed in Jerusalem—and others recovering from knife wounds.