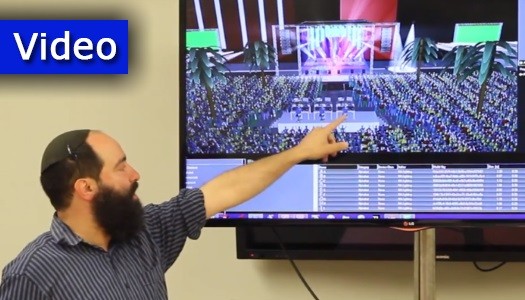 “We were there, we saw with our eyes, and we trembled in awe. But what about our children in fact the entire generation who did not have the zechus to see. As my last will and testimony, I ask of you to gather the Jewish people. Everybody, man woman and child once every seven years. They should gather on Succos in the Beis Hamikdosh, and the king of the Bnei yisroel should read from the Torah, as a messenger from G-d. To everyone at the gathering it will be like Hashem himself was talking to them, instilling an awe for Hashem for the rest of their lives.”

These were the parting words of Moshe Rabeinu. And so it was each Hakhel year everyone, men woman and even small infants gathered in the Beis Hamikdosh.

Since the destruction of the Beis Hamikdosh, this mitzvah has not been observed – until the Rebbe created a massive commotion about Hakhel, asking everyone to get involved, in every way they can, by making gatherings before Succos, on Succos and throughout the year.

It’s our sincere hope that this year Hakhel will take place once again in the Beis Hamikdosh.

In preparation, Tzivos Hashem – in conjunction with the schools and Shuls of Crown Heights – is arranging a mass gathering for the entire community, men woman and children, on Thursday, the 18th of Tishrei, 2nd day of Chol Hamoed (October 1st).

The police will be closing down two blocks of Eastern Parkway during rush hour, so that the program can begin at 7:30pm sharp, thus allowing even the very young children to join.

As you watch the following video of one of the planning meetings, you can see what an incredible program is in store.

Behind the scenes of the Chol Hamoed Sukkos Hakhel event from Digital Studios on Vimeo.