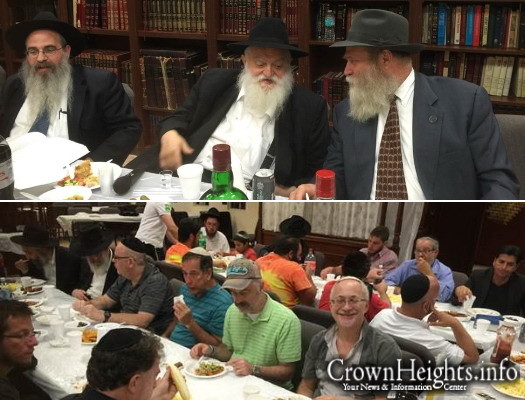 On a recent Thursday night, Chabad of South Broward, FL, hosted an uplifting and inspiring Farbrengen celebrating the completion of their four year journey in learning the holy Hemshech Ayin Beis of the Rebbe Rashab. The journey took four years, but for all participants it was very rewarding.

They started several weeks after Gimmel Tammuz, 5771 (2011), shortly before the 100th anniversary of the start of this famous Hemshech, and concluded the morning of 22 Tammuz, 5775.

The Farbrengen began with Rabbi Raphael Tennenhaus’ insights into the final section of the Hemshech, shedding light upon the importance of learning the Rebbeim’s  teachings. Rabbi Tennenhaus then introduced Rabbi Shloime Zarchi, a Mashpia in 770, who came to Farbreng with the community on this great achievement.

Rabbi Zarchi related several stories regarding the Rebbe Rashab’s writing of the Hemshech. The stories he told brought to life the connection that is established between a chasid and Rebbe through learning their Maamorim, and following their guidelines in Avodas Hashem. Rabbi Zarchi also shared several first-hand stories about the Rebbe from his years as a young bochur in yeshiva in 770, including his observations of many of the Rebbe’s customs as they pertain to Yomim Tovim during those years. He went on to reflect upon his close connection with the mashpia R’ Yoel Kahn sheyichye, and R’ Yoel’s connection with the Rebbe, relating several stories of the Rebbe’s interaction with R’ Yoel.

The crowd was very inspired by the Farbrengen, and have since studied the Sichos of the Rebbe and of the Frierdiker Rebbe about Ayin Beis. Presently, the morning Chassidus Shiur is studying Samach Tesamach, and when finished, they will study Hemshech Samach Vov, as this coming year is 110 years since it was begun.

Following are a few comments from several people who were at the Farbrengen, some of who are regular members of the Ayin Bais class:

Ilan Ichilevici: we have learned in this sefer the real potential of a Jew to become closer and united to Hashem… How Hashem loves and takes care of every Jew in all aspects of his life (בגשמיות and ברוחניות) and how Hashem appreciates the relationship with us and how He also demands the same from us… I believe that when the Rebbe Rashab brought תער״ב בגילוי and when the Rebbe printed it, it was to prepare the world for the ultimate גאולה, and hopefully, we brought it closer.

Reb Nuti Lurie: The fact that there was a shiur in תער״ב  going on every time I came to town, made the shul feel different and had a positive effect on everybody there including myself… I found the Farbrengen enjoyable and uplifting and it was real nice to hear so many chassidishe vertlach and interesting details about the early years in 770.

Rabbi Mendel Spalter: The most beautiful things from this Farbrengen, in addition to many stories that were told was the feeling that we never left Tomchai Timimim/770… It is heartwarming to be in that mode from time to time.