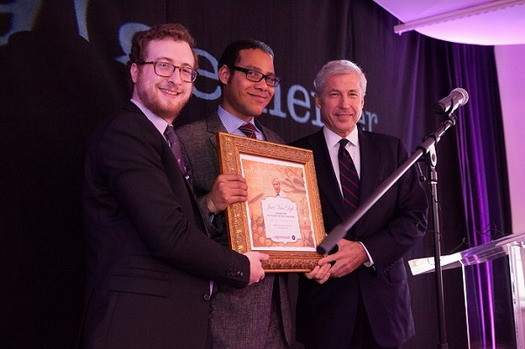 Close to 300 people attended the event, which was held at the Midtown Loft & Terrace in Midtown East.

In presenting Van Dyk’s award, Mercer-Wood highlighted the journalist’s role in helping formulate the Jackson-Vanik amendment in 1974 as an aide to then senator Henry “Scoop” Jackson. The legislation was key to encouraging the Soviet Union to allow Jewish emigration.

In accepting his award, Van Dyk described his time as a prisoner of the Taliban in 2008 and his subsequent relationship with the family of slain Jewish captive Daniel Pearl.

In Peretz’s acceptance speech he delivered a broad and scathing criticism of President Obama’s Middle East policies. He noted that while Obama has taken extensive steps in the region, his real “passion is for a Palestinian state and his passion is shared by John Kerry.”

Peretz continued: “The President is lucky because the press also has an obsession with Israel ‘oppressing’ the Palestinians. Jeffrey Goldberg and Tom Friedman, his stenographers, and The New York Times agree with him. I prefer the Wall Street Journal and The Algemeiner.”

Praising the award recipients, Algemeiner Editor-in-Chief  Dovid Efune said, “It is interesting to note that over the past 100 years some of the greatest agents for change in the Jewish world have been journalists. Theodor Herzl was a journalist, Jabotinsky was a journalist, and I think the same could apply today, especially as some define our era as the ‘information age.’”

Founded in 1972 as a Yiddish broadsheet by veteran journalist Gershon Jacobson, today The Algemeiner publishes a weekly newspaper in English and Algemeiner.com.