« Here’s My Story: Childhood Teacher
Music Video: I Can Be » 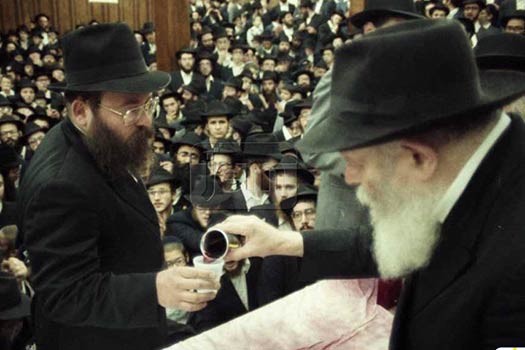 The following open letter was written by noted author and Shleimus Haaretz activist Mrs. Aliza Karp to Mrs. Faigie Rapp, whose husband, Reb Yekutiel, was killed in a horrifying accident earlier this week:

According to the internet, his birthday was Tishu B’Av. And we know his Yartzeit – if Moshiach isn’t here yet, G-d forbid – will be on Yud Beis Tammuz. He entered physical consciousness on Moshiach’s birthday and culminated his journey on the Day of Liberation. One might be inclined to say that his Neshama must be special. But quite the opposite. It is obvious from his lifetime of exemplary Chassidishe thoughts speech and deeds that his Neshama is exceptional, and it only makes sense that his life transitions take place on auspicious days. We just wish it didn’t have to happen this year – or that Moshiach’s arrival and the Geula Shlaima will obliterate Yartzeits altogether.

They say the first stage of grief is denial. I don’t like to think of it as denial. Denial implies a contraction of awareness. I like to think that a spiritual bubble envelopes someone who is experiencing something that is beyond what a person can endure. A spiritual bubble that actually expands the person’s perception to a level where they have an exclusive experience of Hashem’s presence in our darkest hour.

Ten years and a few weeks ago was the Disengagement/expulsion from Gush Katif. I am not sure if I had any contact with Rabbi Kuti since then. But for more than a year and a half prior, we were in deep in the trenches doing projects to fight the Disengagement. So many meetings, so much popcorn. I remember calling you one night when I realized that Rabbi Kuti may not have eaten all day nor had he been able to make time to go home for dinner before our evening meeting. I called and you were relieved with my suggestion that I serve him supper. You were concerned, but you were not going to infringe on his dedication to his missions in life. So many of his missions had to do with Shlaimos HaAretz and dignitaries from Eretz Yisroel.

The first project we did together for Gush Katif introduced me to Dr. Prof. Arieh Eldad, MK. I already knew Dror Vanunu and Moshe Saperstein of Gush Katif. It was shortly after Pesach 5765 (2004). We drew a crowd of thousands to 770, including hundreds of women. It was the biggest, most lively reception the Gush Katif defenders experienced on their awareness raising/fund raising trip. And they walked out with thousands of dollars – Thanks to Rabbi Kuti’s efforts.

Gush Katif activists kept coming to New York for support. They always found an open door in Crown Heights. Many times I would arrange a parlor meeting in the early evening for women and then Rabbi Kuti had something planned for after Maariv in 770.

Rabbi Kuti was always in touch with Rabbi Wolpo in Eretz Yisroel and Rabbi Kirshenzaft in Neve Dekalim, Gush Katif so that we would be connected to the source and work accordingly.

One Sunday, it was Chanukah, Rabbi Kuti brought other Shlaimos HaAretz supporters, and we went to an event at a fancy hotel in Manhattan where American For a Safe Israel (AFSI) was making a big event. They dearly wanted a Chabad representation. Even for this Rabbi Kuti gathered his troops to make fellow Gush Katif supporters feel good. But did Rabbi Kuti ever do anything to pat himself on the back? I don’t think so.

I would describe Rabbi Kuti as naively modest. So modest that he did not know he was modest. And yet his modesty was monumental. As was his integrity and dedication to the Rebbe. Rabbi Kuti and I did disagree from time to time. Because his Ahavas Yisroel was for every Jew. Not just in theory but in practice. Me, not so much.

I want to mention another fond memory. When I lived in Crown Heights I used to like to watch the dancing in 770 in Adar. I know that Rabbi Kuti was the one to coordinate it. I don’t know if he began when the first call came from the Rebbe – but I know he did it faithfully for years, making sure there was live music, and he himself was there, pouring endless cups of vodka.

Faigie. Thank you for letting me share my thoughts with you. It sounds selfish – but now I feel a little better. I only wish there was something I could do to make you feel better. I trust you are surrounded by family and friends. I hope someone is able to record the stories you are going to hear this week and from now on. I know that what Rabbi Kuti did – he could not have done without his devoted wife and loving family.

With love, admiration and an aching heart,

P.S. I am sending this to Crownheights.info in hopes that they post it and someone can pull it up on their phone and read it to you.

« Here’s My Story: Childhood Teacher
Music Video: I Can Be »