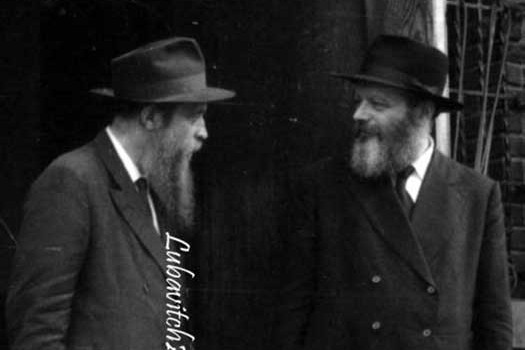 During Rabbi Simon Jacobson’s highly acclaimed weekly virtual broadcast, MyLife: Chassidus Applied, he surprised audiences with airing for the very first time the earliest recording to date of the Rebbe – circa June 1949.

The old recording was shrouded in mystery with the exception of the voices – which were clearly that of the Rebbe and Rabbi Chodakov, the Rebbe’s longtime chief secretary. In the recording one can hear Rabbi Chodakov speaking, with the Rebbe interjecting in the middle, with a few comments. Rabbi Jacobson recalled that someone had sent him the recording a while back, but the nature and circumstances of the recording were unknown. When was the recording from? Why did the Rebbe, uncharacteristically, seemingly interrupt Rabbi Chodakov mid-sentence? What topic was being discussed?

The mystery was solved after Rabbi Jacobson recollected his own experience in editing the Rebbe’s sichos. “As I was listening to the recording again and again trying to discern its origins,” explained Rabbi Jacobson, “I realized that Rabbi Chodakov was reading the Friediker Rebbe’s sicha of Yud Beis Tammuz 5708 (now printed in Sefer HaMaamorim 5709 p. 198) about the role of a mashpia.” “But then,” wondered Rabbi Jacobson, “why was the Rebbe commenting?”

“And then it came to me. They were proofreading the sicha in preparation for publication. Through my years of working and publishing the Rebbe’s sichos, I was very familiar with this type of exchange: This is the way we were trained to proof the Rebbe’s sichos. One person reads the newly typeset proof, while the other compares it to the original manuscript, to ensure there are no discrepancies,” explained Rabbi Jacobson.

“I then looked up the sicha and saw that it was printed in a kuntres dated… Gimmel Tammuz 5709. I realized that this audio, recorded in 1949, is a rare find — the earliest recording to date of the Rebbe, and the only one capturing his voice (speaking about a subject) prior to his assuming leadership (after Yud Shevat 5710), when he was known as the Ramash!

In the recording you can hear the Rebbe questioning the connection between the ideas presented in the transcript of the sicha, and even expressing, amusingly, at the end of the recording: “nu s’iz altz Moshiach’s tzeiten” (nu, it’s all Moshiach’s times) using an expression that describes a situation in which everything is possible.

In honor of upcoming Gimmel Tammuz, Rabbi Jacobson shared this rare and exclusive recording in this week’s episode of My Life: Chassidus Applied.

The episode, which is part of the very popular series applying Chassidus to our present life challenges, was dedicated to frankly discussing the challenges faced by a new generation of adults who have never seen the Rebbe and are challenged to understand what the Rebbe means to them and how they can get inspired to connect with the Rebbe with passion and mesiras nefesh.

“The Rebbe lives on,” explained Rabbi Jacobson, “through his teachings and directives. The challenge — and mission — of our times is to not rely on inspiration from outside of ourselves, but to proactively initiate self-generated efforts, avodah b’koach atzmo. This is central theme of the Rebbe’s leadership, and it couldn’t be more apropos and relevant than to our post-Gimmel Tammuz times. But even though we may not see the Rebbe, we must know that the “shepherd never forsakes his sheep.” The Rebbe continues more than ever to pour upon us his blessings for direction and strength. We must be wise and do our part to receive them.”

This newly discovered recording of the Rebbe, going back 76 years ago, has now emerged, and is a type of reminder of the Rebbe’s continuing presence among us.

Listen to the full episode of MyLife: Chassidus Applied Episode 71.

Tune in every Sunday night at 8pm for latest MyLife: Chassidus Applied, a live farbrengen where Rabbi Jacobson addresses the personal and emotional needs of our community by answering the most pressing questions of our lives from the perspective of Chassidic thought.