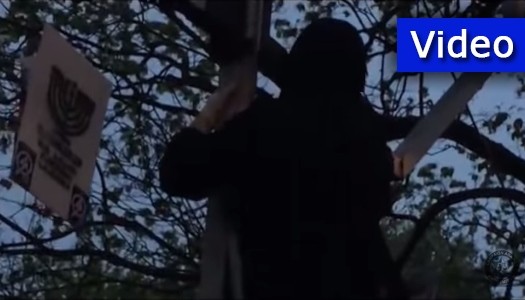 British police say they are examining a video posted on YouTube by a group called National Action, which shows several fascists vandalizing a Menorah set up by Chabad in Cannon Hill Park in the city of Birmingham, UK.

The incident occurred just weeks before a Neo-Nazi rally is set to take place targeting the heart of London’s Jewish community in Golders Green.

National Action is a relatively new far-right group that has hit headlines with a series of racist flash mobs, as well as an expose by a British paper which revealed its members were being trained at a paramilitary-style camp in the English countryside.

The Daily Mirror expose showed one fascist at the camp boasting about building a “new SS,” and saying he would be showing other recruits ISIS propaganda. That report led to an investigation by counter-terrorism police.

The video shows several young men, wearing latex gloves and with their faces blurred to hide their identities, spraying anti-Semitic graffiti and tying anti-Semitic propaganda on to the Menorah, after which they are seen draping a swastika flag over it.

Maggie Suissa, campaigns director for the Union of Jewish Students (UJS), said authorities needed to reassure the Jewish community by tracking down and arresting the culprits.

“It’s disgusting but dishearteningly this isn’t surprising. Jewish people need reassurance, genuine security and the promise from counter terrorism that this group will not continue to get away with spreading their Nazi hatred,” she told the Birmingham Mail.

Police say they are treating the incident as a case of religiously-aggravated vandalism.