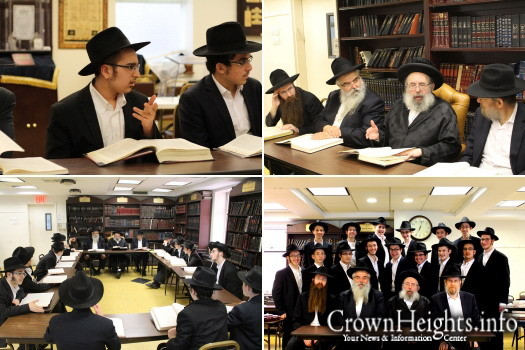 Following a tradition of 25 years, Oholei Torah Mesivta, led by Rabbi Zushe Wilhelm, had a campaign to finish the entire Mesechta of the year ba’al peh, which this year is Meseches Gittin.

Recently, the group went to be tested by Harav Hagaon Reb Gavriel Zinner of Boro Park, together with Rabbi Zushe Wilhelm. The talmidim were asked all types of questions from throughout the whole Mesechta.

Rabbi Zinner said how nice it is to see that the Talmidim use their own time to give the Rebbe such nachas, as the Rebbe mentioned in 5729 (1969) ”Why is there not a big tumult of those Talmidim who learned 100 Blat Gemorah Ba’al Peh.”

Rabbi Wilhelm bentched his talmidim, saying they should all grow to be Lamdonim, Yerei Shomaim and true chassidim, giving nachas to the Rebbe, their parents and Klal Yisroel.