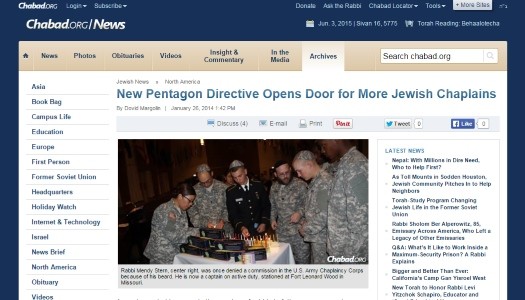 The American Jewish Press Association has announced that Chabad.org and writer Dovid Margolin have won the first-place Simon Rockower Award for Excellence in News Reporting for work done in 2014.

The award was given for New Pentagon Directive Opens Door for More Jewish Chaplains, an in-depth article on recent decisions within the U.S. military to allow bearded rabbis to serve as chaplains and the resulting impact this new development will likely have on Jewish life in the U.S. armed services.

As stated in the story, which was published in the news section of Chabad.org: “With a sorely felt shortage of Jewish chaplains throughout the military, the rule change is expected to pave the way for the enlistment of bearded rabbis as military chaplains, a near impossible goal under the previously strict grooming code.”

Now in its 34th year, the Rockowers are seen as the gold standard of journalism in the Jewish world.

Chabad.org—with more than 43 million unique visitors in 2014 and dedicated to the educational vision of the Lubavitcher Rebbe, Rabbi Menachem M. Schneerson, of righteous memory—is the premier provider of Jewish content on the web.

“We strive to maintain the highest professional standards in our news section, as we do on the entire site as a whole,” says senior editor Yaakov Ort, who directs www.Chabad.org/News. “We’re grateful for the recognition of journalistic excellence that the award highlights.”

The awards—one to Chabad.org and one to Margolin—will be presented at a special ceremony during the Jewish Federation’s annual General Assembly, to be held this year from Nov. 8-10 in Washington, D.C.