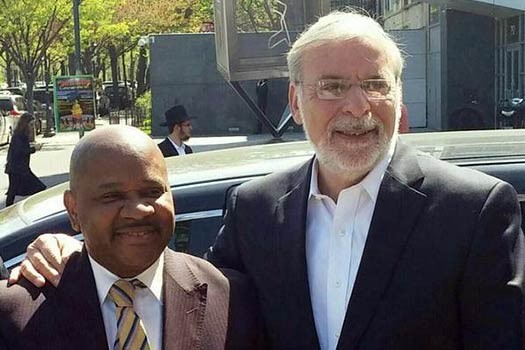 New York State Assemblyman in 48th District Dov Hikind penned the following op-ed detailing the reasons why he is supporting Geoffrey Davis in tomorrows special elections for the 43rd District.

Giving an endorsement is not something I take lightly. When I support a candidate for office, it’s only after taking into consideration numerous factors. Those factors never include a candidate’s religion or even their party affiliation.  I support people who I believe will make a difference. That’s why Geoffrey Davis has my enthusiastic endorsement for NY State Assembly.

My connection to the Crown Heights community goes back to my boyhood. I grew up in Crown Heights and my father had a fruit and vegetable store in the neighborhood. While I currently reside in Midwood, I’ve remained connected with the community all these years, visiting the Rebbe and working with the community’s leaders whenever called upon for help. Regardless of where people reside, I see the Jewish community as one large community and do my best to be helpful.

Geoffrey Davis has always been a dedicated community activist and lifelong Brooklynite. I’ve watched him stand up for the Jewish community whenever needed. He’s fair. He’s honest. I’ve had a relationship with him, as I did with his late brother, New York City Councilman James E. Davis, who was a great friend to the Jewish community.

From working to improve local schools, to running neighborhood anti-violence programs, Geoffrey has spent his career fighting for families in Central Brooklyn. Outraged by the senseless gun violence plaguing the community, Geoffrey formed the Love Yourself & Stop the Violence Organization with his brother 20 years ago, to offer young people alternatives to drugs, crime and incarceration. After his brother was shot and killed in 2003, Geoffrey renamed the organization in his brother’s honor and successfully pushed for legislation restricting gun ownership.

Geoffrey is someone the Crown Heights Jewish Community will be proud to have representing them. In addition to his genuine dedication to anti-violence programs, his stance on education is precisely what we need in Albany right now. It’s easy to make blue-sky promises: The real challenge is getting legislation passed that will make a difference. Education Investment Tax Credits (EITC) are precisely that. The passage of these tax credits will create State-funded scholarship opportunities for all families in need allowing parents with children in private and parochial schools (including our yeshivas) financial relief.

Geoffrey will not be just another vote for EITC but an outspoken voice; he will be someone who fights for EITC in Albany, as well as for everything he believes in throughout the community.

Safer streets in Crown Heights, Education Tax Credits in New York State, and decades of proving his commitment to make a difference: That’s why Geoffrey Davis has my support and I hope he has yours, too.

This post has been paid for by Geoffrey Davis for Assembly.