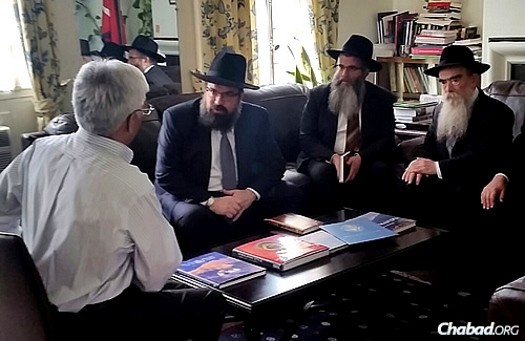 A delegation of Chabad-Lubavitch rabbis stopped by the Embassy of Nepal, which neighbors the Chabad-Lubavitch center in Washington, D.C., yesterday to offer condolences and support in light of the massive earthquake on Saturday that has claimed thousands of lives and devastated the capital of Kathmandu.

Representing the American Jewish Joint Distribution Committee and dozens of other Jewish aid groups, the rabbis pledged the support of the Jewish community as Nepal enters what is sure to be a trying time in the impoverished South Asian country’s history.

The group also recited Psalms, offering their prayers for thousands who have been impacted by the quake and its aftermath.

Rishi Ram Ghimiri, the Charge d’Affaires at the embassy—the new ambassador is due to arrive next week—thanked them for their good wishes and prayers, as well as noting the aid his nation has been receiving from Israel, reminding all of the wonderful relationship with the Nepalese people enjoyed by the Jewish community who live and visit there.

Rabbi Chezky and Chani Lifshitz direct the Chabad House of Kathmandu and the Chabad House of Pokara in Nepal, which are frequented by thousands of tourists annually, including many Israeli backpackers and hikers. They also hold what is regarded to be the world’s largest Passover seder, which draws as many as 1,500 people a year.

Since the quake hit on Saturday, they have been at the epicenter of a wide-reaching search-and-rescue mission as they also provide food, shelter and comfort to hundreds of people who have suddenly lost everything.

The international Chabad-Lubavitch movement is the world’s largest network of Jewish educational, social-service and outreach organizations with more than 4,000 affiliates in 49 states and more than 80 countries.