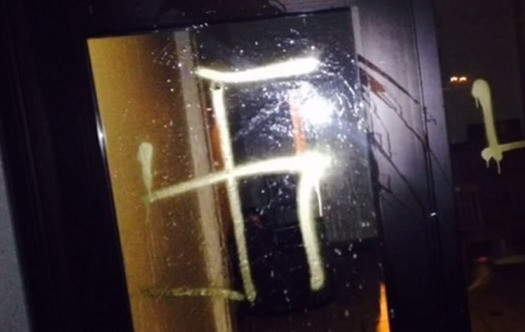 Chabad at Stanford called on Jewish students on Tuesday to respond to the recent incidence of antisemitic graffiti at a fraternity house on campus by showing solidarity with Israel and wearing the Jewish identity proudly.

“How to answer the thugs, physical and intellectual, who single out Jews, or the one Jewish state for attack?” a statement sent out by the Chabad at Stanford asked. “The most dignified way, is not to fight hate with hate but to express your solidarity with Israel.”

“The only best response to antisemitism is to fight it but never internalize the hate. Wear your Jewish identity proudly,” the statement read.

Chabad was referring to swastikas found daubed in gold spray-paint on the walls of Sigma Alpha Epsilon house, along with anarchy symbols, early Sunday morning.

The president of the SAE house told the Stanford Daily he did not believe the attack was directed at any specific individual in the fraternity.

The authorities are investigating whether the vandalism amounts to hate crime.

Chabad said it was “grateful” that the university launched an investigation into the incident.

It also described recent developments on campus as “worrying,” and mentioned  the student senate’s decision to adopt a resolution supporting divestment from companies seen as “complicit in human rights abuses in Israel and Palestine,” according to the Stanford Daily, and the singling out of student senator Molly Horwitz for her Jewishness during an endorsement interview.

President of the Stanford Israel Association, Liana Kadisha, told the Daily, “I don’t want to speculate to the cause of the vandalism, but after [the vote on] divestment, there has been a rise in hostility towards Jewish communities.”

“It’s something that for me made me feel unsafe in a place on campus where I really should feel safe,” Jewish Student Association vice president Asher Kaye told ABC Channel 7 news.

“There can be no doubt that there is growing anxiety in the Jewish community,” said Chabad’s Rabbi Dov Greenberg.

Speaking about the incidence of the antisemitic graffiti, Stanford President John Hennessy said, “This level of incivility has no place at Stanford. I ask everyone in the university community to stand together against intolerance and hate.”