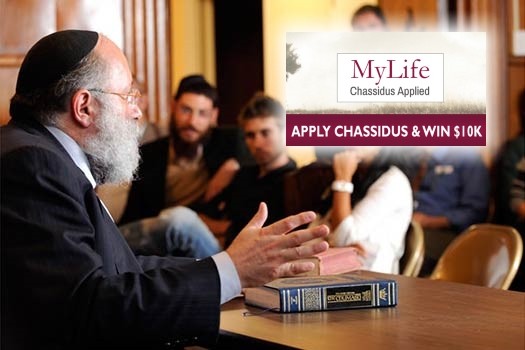 A Chassidus essay challenge hosted by The Meaningful Life Center, which over 500 participated in, will announce the winner of the $10,000 prize in the weekly MyLife: Chassidus Applied broadcast this coming Sunday here on CrownHeights.info

After much anticipation – two months of challenging work, hundreds of submissions, almost a million words written, and many hours of evaluation – The Meaningful Life Center is excited to announce the winners of the first ever MyLife: Chassidus Applied Essay Contest. The live announcement will be made on Sunday, March 22, Beis Nissan, 8-9 PM during the weekly MyLife Broadcast. Everyone is invited to tune in.

The MyLife: Chassidus Applied Essay Contest is an unprecedented effort in hafotzas ha’mayonos chutzah, which captured thousands of minds and hearts around the world. Over 500 submissions were received from across the globe and from across the spectrum – students, laypeople, Rabbis, Shluchim, educators and professors, testifying to the great hunger and need for applied Chassidus. In the words of one of our judges, Dr. Rabbi Yaakov Brawer, “This is one of the greatest things that has happened to Chabad in a number of years.”

The Meaningful Life Center will publish and highlight the top essays throughout the year in its weekly MLC Newsletter. Please subscribe here to join the mailing list and receive the weekly installments.

Additionally, The Meaningful Life Center is exploring different publication channels to share these important contributions, and seeking ways to utilize this great momentum to expand efforts in applying Chassidus and developing more programs in this spirit.

Many of the entrants voiced how the contest has helped them appreciate Chassidus in a new way. A school principal writes that one of her students shared that “since writing her essay she’s relating to Chassidus in an entirely different manner – far more relevant and personal.” Another writes: “Thank you. I haven’t learned Chassidus this way in many years.” “Discussing ideas how to apply Chassidus to life has been the topic of our table conversation for the last few weeks,” writes another contestant.

Rabbi Simon Jacobson, dean of MLC and conceiver of the project echoed these sentiments, “I was surprised by the sheer number of entries – close to one million words written – and the high quality of writing. I was most struck by the soul-bearing truth and heartfelt emotions infusing many of the essays. This was an epic journey, which benefited many, and will certainly have a perpetual impact and bear many fruit. On behalf of all who have gained and will gain from this tremendous effort, I thank all the participants from the bottom of my heart for boldly participating and making it happen.”

The contest was sponsored by The Meaningful Life Center, whose mission is to present Chassidus as a blueprint for life. “There is no doubt,” stated Rabbi Jacobson, “that the contest succeeded beyond our imagination to fulfill its objective, namely to engage and motivate people to use their talents and apply to our personal lives the treasures and life-changing teachings of Chassidus bestowed to us by the Rebbeim.”

Over the last month, the distinguished panel of judges were immersed in evaluating the essay submissions. It was no easy feat, but the three top entries have been selected and the winners will be announced on Sunday, March 22, Beis Nissan, 8 PM during Rabbi Jacobson’s live broadcast of MyLife: Chassidus Applied.

“It is vital to emphasize that in truth that everyone is a winner. When over 500 participants (and the many other who helped and supported their efforts) commit to applying the power of Chassidus to current issues in their lives, there is no doubt that the world itself is transformed!“ said Rabbi Jacobson.