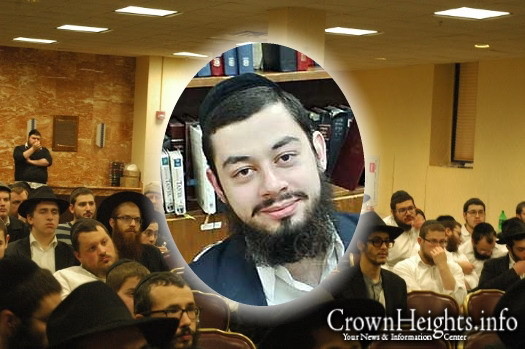 A memorial in honor of the first Yahrzeit of Gedaliah Greenzayd, who was tragically killed one year ago by a snow plow on Kingston Ave., was held at The Rabbinical College of America this past Thursday night. Taking place in the Berger Auditorium, the room was full of his former classmates, as well as many who never even had the opportunity to meet him.

The somber and auspicious event was hosted by Rabbi Chaim Shapiro, Director of the Rabbinic Ordination Program. Gedaliah was a student in that program when the tragic incident took place a year ago, the 23rd of Adar Rishon.

Rabbi Shapiro began the ceremony by giving a background on Gedaliah’s life and how he ended up in Morristown, beginning in Yeshiva Tiferes Bachurim before heading on to the Semicha program. Shapiro described a phone call he got from Rabbi Avrohom Braun of Ohr Samayach in Monsey informing him about a student they had at the Yeshiva who was fascinated with Chassidus, and that he belongs in Yeshiva in Morristown. Rabbi Shapiro connected him with admissions and shortly thereafter, Gedaliah was learning in Morristown. Shapiro also mentioned how Gedaliah was always interested in Yiddishkeit and that he was a “Bachur that lives chassidus.” Greenzayd was fluent in many languages including Russian, Yiddish, Hebrew and English. He would take notes on everything and make marks in his Chumash on verses he found interesting, the last marks coming just a few days before his passing.

Gedaliah’s friend and former chevrusa, Noach Winterstein, then was given the microphone. He gave over a sicha of the Rebbe from Chelek Lamed Vav discussing the purpose of the Mishkan and the differences of opinion between RaMBaM and RaMBaN. He added that there are revealed and concealed connections with Hashem and tied it to how Gedaliah lived his life. Winterstein talked about Gedaliah being a quiet and reserved person, learning by himself a lot, yet he would also love to spread Torah and chassidus by giving a Moshiach Shiur and teaching others on a regular basis.

As custom on a Yahrzeit, there was then a Siyum on a tractate of Talmud. Gedaliah’s good friend and former roommate Levi Goldgrab made the Siyum on Sanhedrin. He related how every time a Rasha comes into the world so does anger and when they are destroyed good comes to the world. On the other hand, when a Tzaddik enters the world good comes to the world and even after they leave this world, Tzaddikim are never lost from us. He passionately stressed how Gedaliah will always be with us and hopefully continue to inspire us to learn.

Rabbi Shapiro then continued to praise Gedaliah saying, “[Gedaliah] was such a Dugma Chaya” (role model), he said. “Whenever you looked at him you were inspired.” He then introduced Rabbi Zalman Dubinsky, Rosh Yeshiva of Tiferes Bachurim, who gave over a powerful Torah thought. “When a tragedy happens and there is pain, people are shaken up,” Dubinsky said. “We have an obligation to channel that pain to something positive and concrete.” His focus was on how we can use everything Gedaliah stood for and taught to help us in the future. “We are not here just to remember Gedaliah, but to utilize his memory to enhance our Avodas Hashem,” Dubinsky said. He related how Gedaliah was careful in utilizing time, and we need to know that it is a challenge to be grateful for what we are given, but that is why we begin every day by saying Modeh Ani.

Another friend and chevrusa of Gedaliah, Gavriel Wood-Isenberg, then took the podium and told everyone about a camping trip they took together a couple of summers ago. They had very little room in the car they had rented, yet Gedaliah insisted on bringing a big box of sefarim so he could teach everyone in the car. He also disclosed how Gedaliah told him, “A Jew learning Torah is like a cup being filled with water. A Jew can’t absorb Torah without pouring some out and giving it to someone else. Yet, just like after you pour out water from a cup, drops will remain.” So even after teaching others Torah, it still remains with you.

Rabbi Avrohom Levin then discussed his relationship with Gedaliah. Rabbi Levin is a Rabbi in the Semicha program and sat next to Gedaliah all the time while he was learning. Levin showed the most emotion of all the speakers as he talked about how there is sadness in even the happiest of times as is illustrated at a wedding by stepping on the glass. “We have no answers,” Levin said. “However, we can ask what can we do about it.” As Rabbi Levin and Rabbi Dubinsky had stressed, the theme of the night seemed to be how would could move on from such a tragic situation, and use everything we have taken from it to put it in a positive light for the future.

The final speaker of the night was Rabbi Boruch Hecht, the head of admissions for Yeshiva Tiferes Bachurim. After thanking everyone for making the event happen, he went into detail about his perception with Gedaliah. “Whenever anyone would ask how are you, Gedaliah always said no problem,” Hecht said, adding that Gedaliah was a low maintenance and high-performance individual.. He just wanted to be in Yeshiva and learn as much as he could and this is something everyone should admire. Hecht then announced all the bochurim in Tiferes Bochurim who had taken part in a special learning for Gedaliah over the last month. Bochurim were to learn for an hour straight without interruptions at a few different periods throughout the day and note it on special papers given out each week marking the hours they learned by day. From this special opportunity, bochurim learned a total of over 750 hours without interruption just this past month alone. One valuable lesson taken from Gedaliah; we do not know how much we can inspire our fellow Jews just by our learning and dedication to Torah.