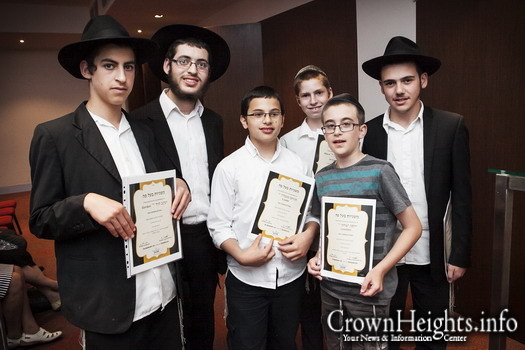 Students, parents, teachers and friends came together on the evening of February 26 in Melbourne, Australia, for the 25th Annual Mishnayos Ba’el Peh Awards Evening to recognize the achievements of Yeshivah College students who had achieved outstanding results in their efforts to learn Mishnayos Ba’el Peh.

The Mishnayos Ba’el Peh program is run in memory of Nathan Dzienciol, OBM, a former Yeshivah College student who sadly passed away 25 years ago, at age 8. The program was started in Nathan’s memory by Nathan’s Mishna teacher, Rabbi A. Aron. By all accounts Nathan was an eager student and dedicated many hours of his free time, even at such a young age, to the learning of Mishnayos. The word Mishnah has the same letters as Neshama (soul) – hence we attribute the learning of Mishna to an elevation/ aliyah of the neshamah. Hence it is fitting that such a learning program is dedicated in his honour.

The Mishnayos Ba’el Peh learning program is run throughout the year and affords students the opportunity to fulfil the mitzvah of learning Mishnayos “Ba’el Peh” – taken literally to mean “by heart”. Cleverly, the program adopts a points system which allocates points based on each child’s age and ability – making it an achievable task. Points are also awarded based on the effort a child puts in which allows for every student to achieve.

The program’s success is greatly attributed to the ‘repeat’ system on which it is based – this encourages the students to be tested on complete chapters of Mishna and Tanya at each special Mishnayos Ba’el Peh Shabbos.

Over 180 students actively participate in the program, and amazingly have managed to memorise in excess of 100,000 lines of Torah over the past year. The achievements of the students was spectacular – with a total of 109,538 lines being memorised; 279 Perokim Mishna, 136 Perokim Tanya and 34 Maschtois.

It is said that “You should honour a zokein – one who has aquired wisdom”. The recent awards ceremony was an ideal opportunity to recognise those students who now have Torah “carved out in their memory”.

Highlights of the awards ceremony included several boys demonstrating their skill by reciting mishnayos, speeches from a number of school Rabbis involved in the program, and an address by the Yeshivah-Beth Rivkah Principal, Rabbi Yehoshua Smukler. Nathan Dzienciol’s father addressed the audience, expressing his gratitude and how impressed he was at the students’ achievements.  Certificates and vouchers were awarded to students to acknowledge the effort the children have put in.