« Rebbe to Netanyahu in 1988: I Had Much Satisfaction from Your Speech; Don’t Be Intimidated
L’chaim: Welton – Kaufman » 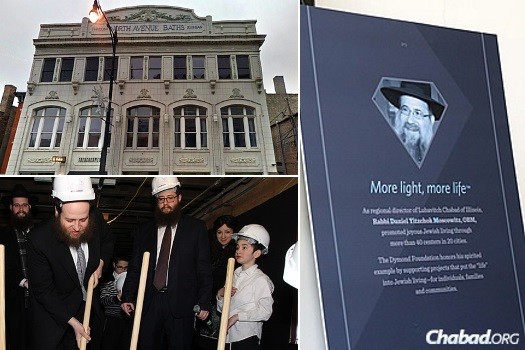 Old directories indicate that there was once a functioning mikvah in Bucktown, a Chicago neighborhood just northwest of the Loop—the city’s central business district—now known for its older single-family homes, new builds with edgy architecture and converted industrial loft spaces.

But as the Jewish community shifted north to the suburbs, Jewish Bucktown faded into the hazy past, and so did the mikvah.

Decades later, right across the street from the site of the original mikvah (now a defunct bath house), a group of supporters gathered last week to sip cocktails, nibble on sushi and carved meats, and break ground for a brand-new entity, “The City Mikvah–Mei Daniel.”

The mikvah will be located in the lower level of the Bucktown Wicker Park Chabad Jewish Center on Milwaukee Avenue, right across from the former bath house.

The evening was a festive one, as young people—each of whom had donated $1,000 to the mikvah fund—celebrated the latest milestone in the growth of their community, which began when Rabbi Yosef and Sara Moscowitz founded the center in 2006. Since then, they acquired the 15,000-square-foot, three-story premises that includes a synagogue, event spaces, a communal lounge area known as “The Living Room” and the rabbi’s residence.

Emotions, however, ran the gamut as the community prepared to observe the first yahrtzeit (anniversary of passing) of the rabbi’s father, Rabbi Daniel Moscowitz, who led Lubavitch Chabad of Illinois until his sudden passing last year at the age of 59. Fittingly, the mikvah will be dedicated in his memory.

‘No Telling What Can Happen’

There is not a person in this room whose life was not deeply touched by Rabbi Moscowitz,” declared the master of ceremonies, Mike Malkoff, whose discovery of Judaism began three years ago when he dropped into the Bucktown center for a Torah class.

Standing around round tables draped with aqua and black linen, and topped with flickering candles, local women shared their hopes for the mikvah.

“The mikvah is a beautiful thing for me,” said Regina Rapoport, who was first introduced to the concept by Sara Moscowitz in advance of her wedding in 2009. “It’s very spiritual … a time to feel connected, something so beautiful I look forward to. I love every aspect of it, the preparation, the immersion—and it will be all that much more special here.”

“There are not many observant people in this area,” said Rapoport’s husband, Eric.

“Mikvah was the first mitzvah we did as a couple, the beginning of our life together. If other people will find an attractive and inviting mikvah experience right here in the neighborhood, there is no telling what can happen.”

Jillian Gliksberg, who lives in the Lakeview neighborhood, which already has a mikvah of its own, says she thinks the spa-like atmosphere will draw women from far beyond Bucktown. “I’m especially excited about the on-site nail salon,” she confides. “This is the kind of thing you hear about, the super-luxuriousmikvahs in other cities, but I’ve never seen anything like it here in Chicago—certainly not in Bucktown.”

Like many others in the room, both women—and their husbands—had learned the procedures that surround the monthly immersion from Rabbi Yosef and Sara Moscowitz, who see it as an especially important mitzvah to teach in a part of town where so many people are just beginning to establish their homes and eventually, their families.

In fact, it was a student of Sara’s who inspired the Moscowitzes to launch the current campaign.

“There was a woman who had learned about mikvah with my wife before her wedding,” the rabbi told the crowd, “but then neglected it for some time. After years of trying to have a baby, she pulled out her notes from my wife’s classes and booked an appointment. She got pregnant right away, and the first person she called was my wife.”

The rabbi went on to say how his father, who had dedicated his life to bringing light and life to others, would live on through the Jewish lives impacted by the mikvah.

Following the rabbi’s talk, many regrouped in the basement for a ground-breaking ceremony replete with hard hats and spades. Those wishing to keep warm upstairs—it was winter in Chicago, after all—were able to watch the proceedings via live streaming.

‘A Time to Connect’

Construction of a mikvah in the basement of an older city building will be quite a challenge, according to organizers, requiring extensive excavation and driving support beams 40 feet down to rest on firm clay. It is just one step in an ongoing process of converting raw loft and retail space into an inviting center for Jewish life. In the fall of 2014, a portion of the roof was removed to make way for a sukkah, and there are plans for a vegetarian Gino’s East restaurant on the street-level, the first kosher store for the famed Chicago-style pizza chain.

“I’m excited to see another mitzvah being brought into our home. I’ve been part of the Bucktown Chabad community as it grew from just one Shabbat table to a full-scale community,” said Erin Norby, who went on to say how she met her husband at Chabad, and has only been able to raise her young family in the neighborhood because of Chabad’s presence there.

“Mikvah is very important for me, personally,” she continued. “Now that we have toddlers, I don’t get out much to Jewish events, but mikvah is my time to continue my connection, to connect to G‑d, to connect to myself, to connect with my husband, to set aside time to think transcendental thoughts and to make myself beautiful for my husband in a womanly way. And now that it will be right here in the neighborhood, there will be so many more women who will give it a try.

“Why not? It’s just down the street, and it’s going to be beautiful. This is going to make Chabad that much more of a Jewish home for us all.”

« Rebbe to Netanyahu in 1988: I Had Much Satisfaction from Your Speech; Don’t Be Intimidated
L’chaim: Welton – Kaufman »