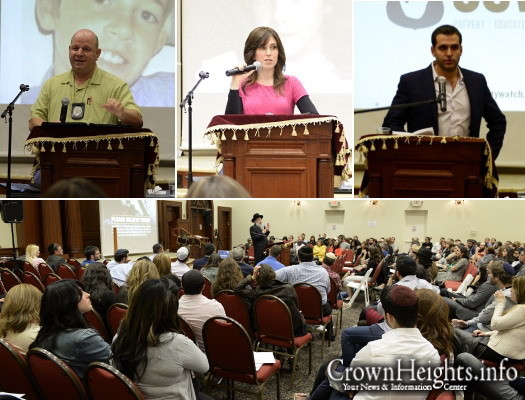 Four hundred members of Miami’s Orthodox-Jewish community filled the main sanctuary of Chabad of Aventura Sunday evening for a night of awareness and education about child abuse (CSA).

The highly charged event served as an opportunity to show support to victims of abuse and to educate the public about the dangers of abuse. Survivors, rabbis, mental health professionals repeated a duel message: the orthodox Jewish community will no longer sweep abuse under the rug and survivors who step forward will be embraced.

The event was emceed by Rosh Lowe and organized by Jewish Community Watch (JCW), an organization committed to raising awareness and preventing CSA in the orthodox Jewish community.

Rabbi Elchonon Tauber, a rabbinical judge from Los Angeles told the crowd that Jewish law not only allows you to inform on abuse to the police, but also insists that someone who knows of abuse and doesn’t report it is in violation of the Halachic (Jewish law) prohibition of Shfichas Damim (murder).

Rabbi Tauber urged the audience to view CSA as they would any other crime. “If you saw someone poisoning the food in a Cheder (religious elementary school), you wouldn’t ask your Rabbi his opinion on whether or not they should be reported. You would go straight to the police. Do the same thing with abuse! If you know of an individual who is harming children, go directly to the police.”

Miami resident and entrepreneur Eli Nash, who has advocated for JCW since it provided him with aid while he confronted his own childhood abuse, told the assembled that keeping the dark secret of abuse quiet is not a healthy option. “Secrets are bad for our health,” Nash said. He also urged the community to combat abuse and support survivors. Nash concluded his talk with a resounding, “We deserve better!”

The attendees also heard from two survivors of abuse, who bravely broke their silence and shared their story publicly. By doing this they sent a message to other survivors that they are not alone, and that even after experiencing the horror of CSA they can take back their power and choose to be survivors rather than victims.

Another survivor of abuse, Bibi Morosow-Saul, explained the psychology of abusers and the hold that they can place over their victims.

Yoni Skurwitz spoke about his experience after he came forward about his abuse: “The re-victimization that I endured by some in the community, led by rabbis of Shuls, schools, and Kollels – none of whom spoke with me, and some of whom knew there were other victims – was a hundred times worse than the abuse itself.”

Dr. Norman Goldwasser, a trauma psychologist, spoke about the impact of a previous JCW sponsored event that took place this past September in Miami. After the event, because of what she had gained at the event, a survivor came to him in order to receive help. Dr. Goldwasser shared the story of her suffering and her road to healing.

Meyer Seewald, founder and CEO of Jewish Community Watch, said that historically Jews have always placed a special emphasis on education. “Since G-d appointed the children as the guarantors of the Torah at Mt. Sinai, generations of parents have risked and sacrificed everything to educate their children according to Jewish traditions, from secret study groups in ancient Rome and communist Russia to the sacrifices parents make today so that they can send their children to Jewish private schools. Despite all of this, there seems to be a lack of understanding or unwillingness to address CSA – an issue that drives so many of our children away from the Torah and towards drug abuse, depression, anxiety, and years of pain!

“This is the mission of Jewish Community Watch, to make sure every child in our community grows up without the pain and suffering that so many of us survivors experienced and continue to experience,” said Seewald. “We have held awareness events in four cities in the last six months and the response has exceeded our expectations every time. With all of us working together, we are getting closer to achieving that goal.”