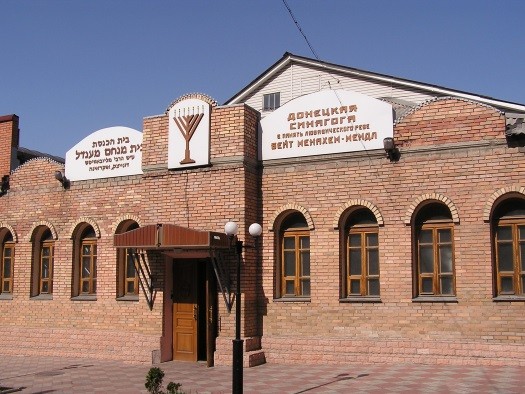 The main synagogue of Donetsk, Ukraine.

A Jewish woman, an employee of the local Chabad pre-school, was killed in the separatist stronghold of Donetsk in eastern Ukraine overnight by a rocket that slammed into her apartment. Other rockets landed and exploded near the city’s main synagogue.

Irina Shelkayeba was cooking supper last night in her apartment in Donetsk when a rocket slammed into her apartment, instantly killing her. She was an active member of the Donetsk Jewish community and a teacher in their Ohr Avner Preschool, according to Rabbi Aryeh Schvartz, assistant to the community’s chief rabbi.

Shelkayeba—whose 30-year-old son lived with her, but was not home at the time of the attack—will be buried on Thursday in Donetsk’s Jewish cemetery. That’s not a simple matter; it’s a dangerous task as fighting between Ukrainian government soldiers and pro-Russian separatists continues to intensify in and around the city.

“We knew Inna very well,” said Schvartz, who has remained in Donetsk to coordinate the Jewish community’s continued presence in that city while its chief rabbi, Chabad emissary Rabbi Pinchas Vishedski, operates out of Kiev. “Unfortunately, funerals are not unique here. An elderly grandfather passed away; we made his funeral today.”

Cemeteries are open areas with little option for cover in case of sudden missile fire, and Schvartz, 31, who is assisted with the funerals by members of the community, acknowledges the unique dangers involved. “Still,” he said, “we have no choice.”

Rabbi Vishedski added: “This is yet another extraordinarily difficult day that we have endured, and sadly, we have recently known many especially difficult and terrible days. I ask that Jews worldwide pray for their brethren in the war-torn territories-for everyone living in danger–and that they should all have peace and security.”

Shelkayeba’s death was followed this morning by shelling in the center of Donetsk, with one shell going through the roof of a bus station and hitting a minibus just 300 meters away from the city’s sole synagogue, Chabad’s Beth Menachem.

“It happened at 7:20 a.m.,” reported Schvartz. “It was early, so it was only the security guard and myself in the building at the time. When it’s so close, everything shakes.”

Reuters reported that the body of a man was seen behind the wheel of the minibus. The shell burned up the bus, as well as a nearby vehicle. Schvartz said that four people were killed in the attack.

Nevertheless, 90 minutes later, the synagogue’s minyan gathered to pray at 9 a.m., as it does every day. Later, emergency food and supply packages sponsored by the International Fellowship of Christians and Jews were distributed at the Jewish Community Center, which is adjacent to the synagogue.

“Everything took place as usual,” noted Schvartz. “Otherwise, I wish I could say things are getting better here, but unfortunately, it’s getting far worse.”

A Jewish resident who asked to be identified as Malka has not been in Donetsk’s synagogue since Sunday morning, and news gets around so slowly in Donetsk that when she picked up the phone, she knew nothing of the death of a fellow Jewish community member.

“I really haven’t heard anything about it,” said Malka. “The synagogue is not close to my home, so I go only on Shabbat and Sunday mornings, for a Hebrew-speaking class. Otherwise, we don’t go too far from home; it’s frightening. We go out to the store to buy some bread or milk, but that’s it.”

Malka explained that whereas a few months ago some areas of Donetsk were more prone to shelling—and others less so—today, they’re all equally in danger. “It’s not calm in any neighborhood anymore. You hear the sounds of war and explosions in every neighborhood, wherever you are, during the day or night.”

She said she doesn’t know if and when she and her husband will ultimately leave the city and their home, but she has her suitcase packed with necessities so they could be ready to flee if the time comes. “Everyone here has their suitcases packed. You pack medicine, water; you need to be ready, but we don’t want to leave yet.”

Asked what had to happen for her and her husband make that decision, Malka brushed off the question. “I don’t want to think about that. Thoughts have power. Think good, and it will be good. I don’t want to do the opposite.”