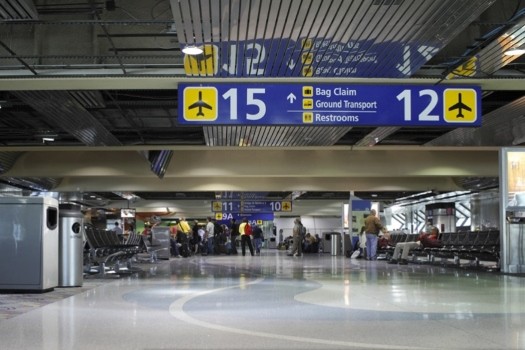 Alix Wall is a columnist at J Weekly, a Jewish newspaper based in Oakland, CA. Her most recent column was about an inspiring and touching encounter she and her husband experienced with a young Chabad rabbi in the airport, while they were en-route to Baltimore to be with his dying mother.

From J Weekly by Alix Wall:

A few months ago, my husband, Paulie, and I were on our way to Baltimore to be with his dying mother. A Chabad rabbi was in the security line at Oakland airport, just a few people behind us. For those flying through New York’s JFK, of course, this might be a common occurrence, but in Oakland, not so much.

Because of my work in the Jewish community, I have come to know many Chabad rabbis in the area, but I didn’t recognize this one. He was young, so I thought he probably hadn’t been here long, or maybe he was just visiting. On the other hand, with Chabad’s explosive growth here, there are rabbis I haven’t met.

Some Jews consider Chabadniks to be more authentic Jews than the rest of us, that their higher observance level gives them a more direct line to the Almighty. I can’t say I buy that. However, a rabbi is a rabbi, and I found myself asking Paulie whether we should ask this total stranger for a blessing for his mother, that her passing would be as easy as possible. We debated it as we walked to our gate, and the Chabad rabbi walked in the same direction.

We decided if we ended up at the same gate, we would make our request, but when we got there every seat was full. We backtracked to the previous gate, and there sat the rabbi, with two empty seats next to him; it was beshert.

We sat down, and the rabbi smiled and shook Paulie’s hand. “Hi, I’m Yosef,” he said, and then quickly asked, “Are you Jewish?” Duh. We soon learned that he was Rabbi Yosef Romano and his wife was Devorah Leah Ferris, one of the daughters of Rabbi Yehuda and Miriam Ferris (co-directors of Berkeley Chabad). He and his wife run Berkeley’s Friendship Circle, Chabad’s program for children with special needs. He was on his way to a wedding.

We told him the purpose of our journey and asked for a bracha for Paulie’s mom. The rabbi whipped out his smartphone and called up the “Write to the Ohel” app. (What? You haven’t heard of it, either?) The app allows users to write a note that will be printed out and hand-delivered to the grave of the rebbe, Menachem Mendel Schneerson, the deceased seventh leader of the Chabad/Lubavitch movement. Paulie typed his message into the rabbi’s phone.

We acknowledged our awkwardness about our request, since Paulie’s mom had been born Jewish but later became Unitarian Universalist and, most recently, Quaker.

Before we knew it, our flight was boarding. Seizing his opportunity, Rabbi Romano went for what, given the chance, every Chabadnik asks of every Jewish man — he told Paulie his prayer had a better chance of being granted if he’d do the mitzvah of putting on tefillin. The rabbi had a kippah and tefillin in his carry-on for just such occasions.

While many less observant men balk at the suggestion, Paulie has no such baggage. So right there in the airport, he put on tefillin for the fourth time in his life and said the required blessing in front of a bunch of curious onlookers, before we hurriedly boarded our flight.

I had given Rabbi Romano my card, and a few days later I received an email from him saying he hoped things were going as well as possible for us, and that if Paulie needed a minyan to say Kaddish with when he returned, he should be in touch. I was deeply moved by the gesture, that someone we had spoken with for only a few minutes at the airport made the effort to let us know he was one of many holding us in their thoughts while we dealt with the difficulties across the country.

I called him before writing this column to ask whether he noticed us stalking him in the airport. “I noticed you noticing me and thought you wanted to be approached when you sat down next to me, but I never deemed it stalking,” he said, adding that it happens with some frequency.

We now have an open invitation for Shabbat dinner at the Romanos’ home. We have every intention of taking them up on it. When I told him I was writing about our meeting, in typical Chabad style, he said, “I hope your article encourages people to approach us whenever they see us. That’s what we’re here for.”