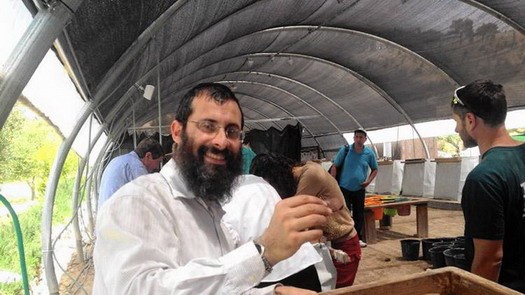 Rabbi Avrohom Stolik combines his knowledge of Jewish history and passion of archaeology through the presentation, “Jerusalem Uncovered.”

A number of visits to Israel, particularly Jerusalem, have sparked Rabbi Avrohom Stolik‘s interest in archaeology.

Stolik, director of Chabad in Downtown Coral Gables, FL, has combined his knowledge of Jewish History with his archaeological passion while lecturing on the topic of biblical archaeology for more than a decade, focusing mainly on Jerusalem. He has been called the “Jewish Indiana Jones” and has given his “Jerusalem Uncovered” presentations across the country, including locations in South Florida. These presentations center around biblical archaeology and feature discoveries that show the connection between the Bible and the land of Israel.

“This is a topic that I’m very passionate about,” Stolik said. “I feel a sense of pride and a sense of connection with our forefathers in the land of Israel. It gives you a sense of satisfaction that these are stories that I learned in the Bible as student and continually study and then every so often, when something is actually found that corroborates a story and brings the story to life, it gives you a feeling of satisfaction.”

Stolik’s next scheduled local presentations take place at Chabad of West Boca Raton in Jan. 13 and April 16 and 23 at Chabad of Boca Raton. He has also delivered the presentation “The Archaeological Claim to Jerusalem” in August 2012 at the National Jewish Retreat in Weston. He visits Israel on a regular basis where he goes to the archaeological sites that were studied. He’s also in touch with archaeologists in Israel and reads their papers extensively.

Stolik said that discoveries are being made every month and that there are constant archaeological excavations at any time in Israel, including Jerusalem. He mentioned that one of the findings that just made a tremendous impact was the discovery of King Davis Palace.

Stolik said that even if not for these discoveries, people of Jewish faith would still believe in the authenticity of the Bible.

“We would still believe in God but it’s always nice and its strengthens our faith when we find actual corroboration of the stories of the Bible through the archaeological findings,” he added. “It’s an added bonus when you find archaeological evidence that support the stories in the Bible.”

Stolik stressed the importance of these archaeological discoveries because there are people around the world in various intellectual circles delegitimizing the ancient historical Jewish connection to the Land Israel and Jerusalem in particular. He mentioned that these discoveries show clear evidence that Jews have been living In Israel for thousands of years and that stories in the Bible can be corroborated by them.

One of the several local places Stolik has presented in the past is Palm Beach Synagogue. The synagogue’s Rabbi Moshe E. Scheiner called Stolik “brilliant.”

“He really is an insightful and informative teacher who really has a good grasp of archaeological, historical information and who really takes you on journey back in time through power points and easy to understand visuals and explanation,” Scheiner said. “Anyone who comes to his class walks away enlightened.”