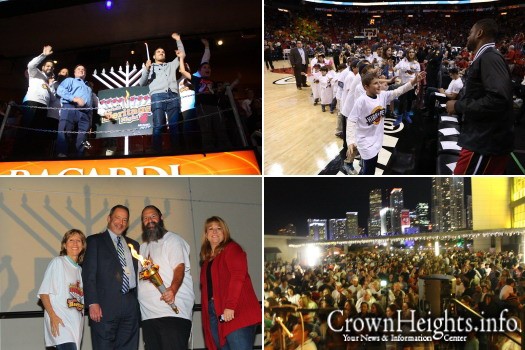 Jewish Heritage Night with the Miami Heat on December 17 was, as advertised, Spectacular! From Heat stars Dwyane Wade and Chris Bosh appearing on the giant screen to wish the sold out arena “Happy Chanukah” to all the celebrations that took place, Jewish Heritage Night (JHN) once again proved to be a grand celebration of the Chanukah holiday and Jewish unity.

Fans of JHN were granted exclusive early entry and after select children from the Jewish community graced the court to hi-5 the towering basketball players from the Miami Heat and Utah Jazz, highly acclaimed Jewish star Yoni Z electrified the crowd with his wonderful rendition of the National Anthem. The New York based singer received tremendous applause.

JHN sponsors Ryan Shapiro with his son Dov (9) and Gideon Gratsiani and his son Dovber (8) were then chosen as Honorary Captains and invited to present the Game Ball to the referees and participate in the traditional handshake between the Heat and Jazz captains.

“This was fantastic,” said Shapiro. “Chabad, especially in Florida does incredible work. They outdid themselves tonight, creating such thrilling and unique opportunities for the kids to enjoy the Chanukah festival and feel proud of being Jewish.”

Jewish pride was most felt when renowned philanthropists Mr. Rick Stone and his son Bennett (9) together with Mr. David Schottenstein and son Ari (10) kindled the Menorah inside American Airlines Arena at the conclusion of the first quarter. The announced attendance of 19,633 fans, many donning kippas and Jewish Heritage Night t-shirts rose to their feet and celebrated the Chanukah display with a standing ovation.

The Miami Heat also took time out during the first quarter to recognize the Chabad rabbis who annually make Jewish Heritage Night a great success. Invited onto the court were Rabbis Pinny Andrusier, Chaim Lipskar and Eli Lipskar. Joining them for the recognition ceremony were Israeli Network CEO Amit Ben-Yehuda and representatives of Winn Dixie and Kosher Kingdom in Aventura, who helped sponsor the event.

The celebration continued at half time when Israeli superstar Yishai Lapidot took to the court with his group of dancers ‘Oif Simchas’ to sing a five minute medley of his most popular hits.

The evening reached a crescendo as more than 5000 fans packed the East Plaza for a highly energetic concert with Yoni Z. The singer was joined on stage by the Heat mascot ‘Burnie’ and a team of dancing rabbis.

“The crowd was electric,” said Rabbi Eli Lipskar. “They did not want to stop singing and dancing.”

Even though play resumed inside, the concert continued for nearly an hour, till the 4th quarter was under way.

Following the directive of the Lubavitcher Rebbe, Rabbi Menachem Schneerson, to continuously add light and illuminate the darkness of the outside, plus a mandate this year from Chabad Headquarters in Brooklyn, New York to #ShareTheLights, a second Menorah lighting took place during halftime outdoors on the East Plaza.

Using the official torch of the 2015 JCC Maccabi Games being held this summer in Broward County, a giant 9 foot Menorah was lit by Heat CFO Sammy Schulman, Former Cooper City Mayor Debby Eisinger and Mr. Eli Nash – who helped sponsor over 300 underprivileged children attend the game. Rabbi Moshe Kievman was honored with singing the blessings.  Glatt Kosher food including traditional potato latkes was served both inside the arena and on the East Plaza.

As fans made their way to their seats just before tipoff, two of the Maccabi teams played an 8 minute scrimmage with Burnie serving as the referee.

Rabbi Chaim Lipskar remarked, “Thank G-d our event grows every year. Even without Lebron James we sold out of every ticket the Heat made available.” In addition to the many Jewish season ticket holders, more than 5000 fans purchased tickets for Jewish Heritage Night.

“Families know that the evening is not only about basketball,” said Lipskar. “There’s always plenty of activities and Chanukah fun for all ages, especially the older children and teens. In fact, the Chabad C-Teen network arranged for more than 350 teenagers to attend the game from all over South Florida.”

Rabbi Pinny agreed. “The Miami Heat have been wonderful in helping us create this great Jewish experience. They offer our guests so many opportunities to interact with the players. They also fill the arena with lively Jewish music, arrange for their stars to offer the crowd Chanukah greetings and allow us to turn the evening into a giant Chanukah party with Jewish entertainment.”

“Jewish Heritage Night was perfect except for the score,” screamed 10 year old Jonathan Gold after the game. The Heat did lose 105-87 but that did not prevent the score of smiles on people’s faces. It was evident that one and all clearly enjoyed a spectacular Chanukah celebration with the Jewish community and the Miami Heat.