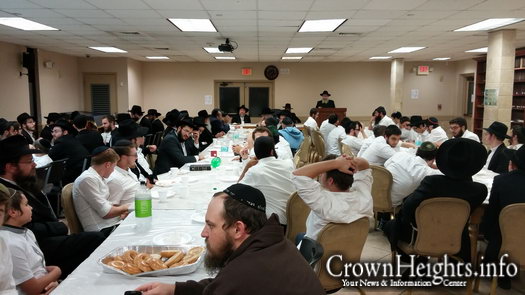 The Anash Community and Temimim joined the Siyum Horaambam hosted by the Yeshiva Gedolah of Greater Miami.

A large crowd began to fill the Zal of Yeshivah Gedolah, where a Full Seudas Melava Malkah was served.

There was an air of festivity among all thos attending. Since this year is also the 11th Siyum for the Perek Echad Track, all were able to participate as full partners in the Chagigas Hasiyum.

The event was emceed by Rabbi Bentche Korf, Menahel of Yeshiva Gedolah, who gave warm words of introduction. Rabbi Avrohom Korf, head Shliach to the State of Florida, who could not attend for personal reasons, sent his Regards and Borcho.

The Siyum of the 33rd Cycle of the Daily Study of Rambam was made by Rabbi Leib Schapiro, Rosh Yeshiva of Yeshiva Gedolah, as well as Rav of Beis Hamidrash Beis Menachem in Miami Beach.

Rabbi Schapiro delivered the Hadran al Horambam that the Rebbe said in 5735, which was published in honor of the first Siyum Horambam. He explained the Hadran in his classic style, elucidating and simplifying complex matters, and peppering with explanations and Vertlach.

Rabbi Bentzion Korf, Menahel Klolli of the Moisdos in Miami and Rav of Beis Hakneses Keser Avrohom, made the Hascholoh of the 34th cycle of Rambam.

He then explained the connection between the Rambam and Yud Tes Kislev, the Yom-Tov we are just coming from. Rabbi Korf described how the first Mitzvah in Rambam – To Know Hashem – is fulfilled primarily through studying Chassidus.

Afterword Rabbi Bentch Korf pointed out how the famous Pasuk “Umalah Ho’Oretz Deyah Es Hashem Kamayim Layon Mechasim” – which is the end of the Rambam is also mentioned in the Daily Tanya of Shabbos.

Lastly, the Rabbi Velvel Lipsker, Mashpia at the Yeshiva Gedolah, continued on the theme of Rosh Hashana Lachasidus and The Hascholas Horamabm. He spoke about the Chassidishe explanation of “Daas” meaning “Realization”. He also shared a story of the Baal Shem Tov on the topic, in honor of the Melaveh malka.

The Divrei Torah were interspersed with Chassidishe Nigunim, and warm feelings of Sheves Achim Gam Yochad. The event concluded with bentching, which was led by Rabbi Bentzion Korf.

All in attendance were inspired to renew their commitment to keep the Rebbe’s Takonoh to study the Rambam daily and to bring about the coming of Moshiach.