« Poland’s Ban on Shechita Overturned
One Hero to Another: Teen Gives $5,000 From Bar Mitzvah to a Sick Friend »

Today, Yud Tes Kislev, “The Rosh Hashanah of Chassidus,” marks 216 years since the release of the Alter Rebbe, R. Schneur Zalman of Liadi, founder of Chasidus Chabad, from prison in the year 5559 (1798). This year also marks 202 years since the Alter Rebbe’s Histalkus. In honor of this auspicious day, which is referred to by Chasidim as the “Holiday of Holidays,” Farbrengens are being held around the world!

From Chabad.org: On the 19th of Kislev of the year 5559 from creation (1798), Rabbi Schneur Zalman of Liadi — a leading disciple of Rabbi DovBer of Mezeritch (see previous entry) and the founder of Chabad Chassidism — was released from his imprisonment in the Peter-Paul fortress in Petersburg, where he was held for 52 days on charges that his teachings threatened the imperial authority of the Czar. More than a personal liberation, this was a watershed event in the history of Chassidism heralding a new era in the revelation of the “inner soul” of Torah, and is celebrated to this day as “The Rosh Hashanah of Chassidism.” 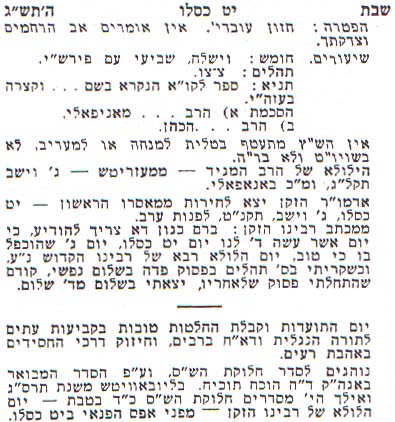 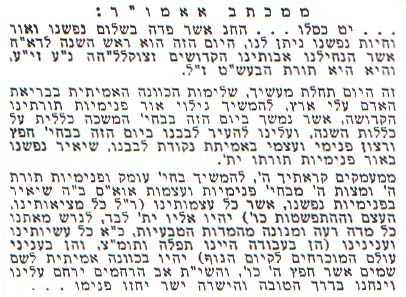 Yud-Tes-Chaf Kislev, the Festival of Liberation:594

The 19th and 20th of Kislev are the Rosh HaShanah of Chassidus.

The following is the festive greeting used on these two days: “A good Yom-Tov! May you be inscribed and sealed for a good year in the study of Chassidus and in the spiritual lifestyle of Chassidus.”[598]

The 19th of Kislev is the yahrzeit of our saintly master, R. DovBer, the Maggid of Mezritch, who [as successor to the Baal Shem Tov] was the mentor of the second generation of the chassidic movement – from 5521 (1761) until his passing on the third day of the week of Parshas Vayeishev, Yud-Tes Kislev, 5533 (1772). His resting place is in Anipoli.[599]

From a letter of the Alter Rebbe: “This indeed must be made known, that on the day which G-d made for us – on the 19th of Kislev; on the third day of the week (concerning which the Torah twice writes ‘It is good'[601]); on the yahrzeit of our holy master [the Maggid of Mezritch], whose soul reposes in Eden; – on that day, while I was reading the verse in the Book of Tehillim that begins, ‘He has redeemed my soul in peace,'[602] and before I began the following verse, I went forth in peace through the G-d of Peace.”[603]

The following statement, [handed down by the oral tradition of elder chassidim of that time,] was made by the Alter Rebbe in connection with Yud-Tes Kislev:[604]

(First Version:) “This day will be fixed as an everlasting festival for Israel, a day on which the great Name of G-d will be exalted and hallowed. The hearts of thousands of Jews will be aroused in repentance and the service of the heart (i.e., prayer), for this episode is engraved in the heart of the Israel of the World Above, and inscribed in the heart of Israel in This World.”

(Second Version:) “This day will be fixed as an everlasting festival for Israel, a day on which the great Name of G-d will be exalted and hallowed. The hearts of thousands of Jews will be aroused in repentance and the service of the heart (i.e., prayer), for when this episode will be engraved in the heart of Yisrael Sava,[605] it will be inscribed in the heart of Israel in This World.”

From a letter of the Rebbe Rashab:[606] “Yud-Tes Kislev,…the festival on which ‘He redeemed our soul in peace,’ and the light and vitality of our souls were given to us, is the New Year for Chassidus – which our saintly forebears, [the Rebbeim of their respective generations,] have bequeathed to us – i.e., the teachings of the Baal Shem Tov.[607]

”[We read in the Machzor:] ‘This is the day which is the beginning of Your works.'[608] [G-d’s] true and ultimate motive for creating man upon earth is [His desire] that man cause the light of the innermost dimension of our holy Torah to be revealed. On this day, that light is forthcoming in a general way for the entire year. On this day, therefore, it is our duty to awaken our hearts to an inward and elemental desire and yearning, within the very core of our hearts, that G-d illuminate our souls with the light of the innermost dimension of His Torah.“

”One ought to prepare oneself for the approach of the Rosh HaShanah of Chassidus in ways that recall the days of Selichos and the month of Elul.“[609]

”For a chassid, Yud-Tes Kislev is the day of his [spiritual] circumcision.“595

One does not say Tachanun on the 19th or 20th of Kislev, nor at the Minchah that precedes the 19th of Kislev.

“The elder chassidim of Chabad have received an oral tradition handed down by the earliest chassidim of the Alter Rebbe, that the celebration of Yud-Tes Kislev as a Yom-Tov is crucial to the manifestation of the joy of this day, which the Alter Rebbe drew down to this world by means of his own self-sacrifice for the sake of the customs of Chabad chassidim.”[610]

“This is a day for farbrengen and for resolving to set aside fixed times for the study of Torah in public, both its revealed planes (nigleh) and its hidden dimensions (Chassidus). It is a day for the strengthening of the spiritual lifestyle of chassidim in a spirit of brotherliness.”[611]

The Rebbe Rashab used to make an appeal for charitable purposes during the farbrengen of Yud-Tes Kislev.[612]

It is customary to distribute the tractates of the Talmud which various individuals undertake to study in the course of the coming year, in accordance with the letter of the Alter Rebbe, beginning Hocheiach Tochiach, that closes Kuntreis Acharon at the end of Tanya. (The tractates are commonly apportioned on Yud-Tes Kislev.[613])

The following is the relevant passage: “Complete the study of the entire Talmud every year and in every community, the tractates being apportioned by lot or by consent. In a city where there are numerous synagogues, each congregation should complete the Talmud. And if a congregation is too small to implement this, they should join forces with men of a larger one. This program shall be neither violated nor varied.”

Those who belong to a community which, for whatever reason, is “too small” to cope with the entire Talmud, customarily participate in the distribution of tractates that is arranged by the Machne Israel organization in the beis midrash of the Rebbe Shlita.

On Yud-Tes Kislev one recommences the annual cycle of daily readings in Tanya, as divided by the Rebbe Rayatz.[614]

In the letter which he appended to his study guide he referred to “the readings in Likkutei Amarim – Tanya as apportioned for each day of the year, from the Rosh HaShanah of Chassidus, Yud-Tes Kislev, until next year’s Yud-Tes Kislev. (May it greet us and all our Jewish brethren with goodness and with blessing, both materially and spiritually.)”[615]

Extract from a letter of the Rebbe Shlita:

“The practice has become widespread[616] to hold the main farbrengen of Yud-Tes Kislev on the eve of the 20th, because the Alter Rebbe was released from prison on the 19th at Minchah time, and for the following three hours he found himself in the home of an antagonist to Chassidism, where he suffered spiritual anguish.[617]

”In many places, nevertheless, people foregather for a farbrengen on the eve of the 19th as well – and may chassidic blessings light upon them.

“In general, the farbrengens of any city are arranged in either of two ways:

1. they can be spread out in many locations, so that people who would not travel far afield should also participate; or

2. all those interested can meet at one location, for ‘In a multitude of people is the King’s glory.'[618] Such a farbrengen should be steered by the venerable elders and the men of stature within the community.

”Abundant quantity or superior quality?[619] Their relative merits are the subject of a classic debate.[620] For comparable cases see: Shabbos 127a; Megillah 3a (in Tosafos, s.v. mevatlin besofo); Avos 3:15 hakol lefi hama’aseh), and see Peirush HaMishnayos there); Iggeres HaKodesh, Epistle 21; and other sources. These are obviously not exact parallels to our case, but space does not permit further elaboration.

“At any rate, I would recommend that on the first night, the eve of the 19th, farbrengens should be held in various places (where the following night’s gathering should be announced), and the next evening all concerned should assemble in one place.

”It goes without saying that what matters ultimately is that people should rouse themselves and ‘resolve to set aside fixed times for the study of Torah in public, both its revealed planes (nigleh) and its hidden dimensions (Chassidus), and strengthen the spiritual lifestyle of chassidim in a brotherly spirit.’ “[621]

594. [In the original, ”the Festival of Liberation“ appears as Chag HaGeulah.]

598. A facsimile of the letter of the Rebbe Rashab that discusses Yud-Tes Kislev as the Rosh HaShanah of Chassidus is reproduced in Kuntreis U’Maayan (Heb. edition only), p. 17 [and translated below]; the background to its first appearance is described in an extract from the Diary of the Rebbe Rayatz, op. cit., pp. 15-18; the above-quoted festive greeting appears in HaYom Yom (p. 113), which also reproduces the text of the letter (p. 4).

600. HaYom Yom, p. 4. See Megillas Yud-Tes Kislev; the sichos of the Rebbe Rashab in Toras Shalom; the sichos of the Rebbe Rayatz and of the Rebbe Shlita on the occasion of each year’s Yud-Tes Kislev; Kuntreis Limud HaChassidus, ch. 6ff.; Beis Rebbe, Part I; Sefer HaMaasar VehaGeulah; and other sources, [including, in English: The Arrest and Liberation of Rabbi Shneur Zalman of Liadi (Kehot, N.Y., 1964), a translation by R. Jacob Immanuel Schochet of the Hebrew original by R. Avraham Chanoch Glitzenstein; R. Nissan Mindel, Rabbi Schneur Zalman of Liadi (Kehot, N.Y., 1971)].

604. Reproduced at the beginning of Megillas Yud-Tes Kislev. [For the historical background to this statement see Likkutei Dibburim (and likewise in English translation), Vol. I, ch. 2a, sec. 9, and footnotes there.]

605. A gloss in Megillas Yud-Tes Kislev notes that the Alter Rebbe was accustomed to using the word Sava (saba; lit., an elder, or sage) to describe baalei mochin and baalei de’ah, in the spirit of the expression [paraphrasing the Zohar], saba da’ati, sasim umyushav [”Israel of the World Above“ and Yisrael Sava (in the original, Yisrael dele’eila and Yisrael saba, respectively) are Kabbalistic terms for certain partzufim.]

611. [From the letter of the Rebbe Rayatz that appears at the beginning of the booklet entitled Yud-Tes Kislev.]

613. From the year 5663 (1902) onwards, because of lack of time on Yud-Tes Kislev, the distribution of the tractates [in the original: chalukas HaShas] in Lubavitch was carried out on the 24th of Teves, the yahrzeit of the Alter Rebbe. In 5713 (1952), fifty years later, the Rebbe Shlita restored the custom in various places to its original date, Yud-Tes Kislev.

615. Foreword to the daily study guide entitled Moreh Shiur [which appears as the first appendix to all current editions of the Tanya, as published by Otzar HaChassidim]. [See also its English translation (Kehot, London, 5735).]

619. This is also related to the difference between the two phrases, mah rabu (”How manifold are Your works!“ – Tehillim 104:24) and mah gadlu (”How great are Your works!“ – ibid., 92:6); this is discussed in the second maamar beginning Vaeira in Torah Or, p. 56b. Another example of such contrasts: oros merubim (”intense lights“) vs. Keilim merubim (”capacious vessels”); this is discussed in the maamar beginning Matzah Zu, 5667. (Note of the Rebbe Shlita.)

621. These concluding words are quoted from the letter of the Rebbe Rayatz that appears at the beginning of the booklet entitled Yud-Tes Kislev. (Note of the Rebbe Shlita.)

« Poland’s Ban on Shechita Overturned
One Hero to Another: Teen Gives $5,000 From Bar Mitzvah to a Sick Friend »