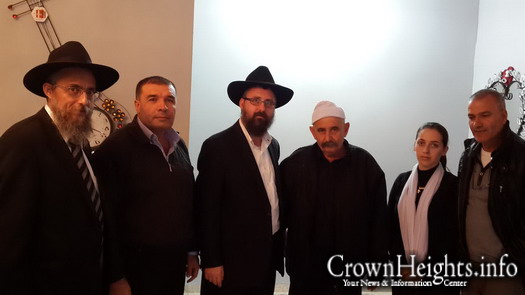 Chabad’s Terror Victims Project representatives recently visited the home of Zidan Saif, of blessed memory. He was the Druze police officer who was killed in the horrific terror attack in Har Nof a short while ago.

Zidan was trying to protect the lives of the Jews praying inside the synagogue. His great, heroic sacrifice saved many lives that might have been lost without his courage and dedication.

Rabbi Menachem Kutner,  CTVP Director, and Rabbi Ahron Prus went to the home of Rinal Saif, Zidan’s widow, and their 5-month-old baby. They live in the Druze village of Yanuach in the Galil.

Out of respect to the Rabbis, they were met and greeted there by the head of the local council in Yanuach along with other respected members of the community.

It was an extremely moving and emotional visit. Rabbi Kutner presented a financial gift to Rinal from two anonymous CTVP donors in America.  He told her how much the brave actions of her husband were appreciated and that they brought condolences on behalf of  all those whose lives had been saved because of him. The young widow was deeply grateful as she struggled to maintain her composure. She asked us to convey her deep gratitude to the donors.

She was also very grateful that her husband’s heroism was recognized and acknowledged not only in Israel but internationally as well.

Many people throughout the Druze community heard about the visit and were so very appreciative on behalf of Rinal and the baby.

Several years ago, a Druze police officer from the same village was killed in the line of fire.  The same donors sent a gift for his family at that time. When his brother heard that representatives of CTVP were in their village, he came to say hello and reiterate his great gratitude for the help CTVP provided to his brother’s family.

As Israel continues to struggle with violent terror attacks including a stabbing today, CTVP’s work is taking us across the country to the families of the victims. Your generous help at this difficult time will bring comfort, help and hope to Israeli families whose lives have been shattered by terror and war.