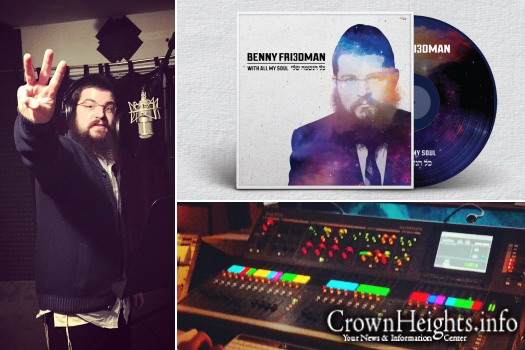 “Kol Haneshama Sheli” was executive produced by Friedman and produced by his long-time colleague and close friend, Sruly Meyer, producer of Friedman’s 2013 “Bnei Heichala – A Shabbos with Benny Friedman.” The music was directed by Ian Freitor, and in a firm nod to stylistic diversity the twelve tracks comprise nine arrangers, twelve composers – including a twelve-year-old – six backup vocal groups and two guest star appearances.

“We really try to give every track a fresh feel,” said Friedman. “We incorporated the unique style and flavor of a wide variety of musical minds and we’re confident that the audience will appreciate the diversity.” From the rollicking fun of “Kol Haneshama”, to the hopeful lyrics of “Fulfill”, to the haunting notes of “Al Tira”, and everything in between, the album certainly does strive for excellence in variety.

“The goal of this album is to pick up where we left off with ‘Bnei Heichala’,” says Meyer. “We strove to create a solid listening experience from track 1 to track 12, an experience you will want to enjoy over and over again.”

While eleven of the tracks are new compositions, the full-steam-ahead rock song “Im Ein Ani Li” is a cover of a classic – and a childhood favorite of Friedman’s – from the group Raya Mehemna, originally released in 1982.

Rivkah Brachfeld, a twelve-year-old Toronto native, composed the song “Essa Einai.” “She had written the song in tribute to her late, beloved grandfather,” says Meyer, “and when Benny heard it sung at a recent wedding, it gripped him and he immediately requested permission to record it.” Shlomo Simcha accompanies Friedman in “Essa Einai” and his cousins Shmuel and Bentzi Marcus of 8th Day accompany him in the title track.

“Taking its cue from the title track ‘Kol Haneshama Sheli’, the album dwells generously on the theme of the soul,” says Friedman. “In ‘Yesod Veshoresh”, Pinky Weber used some key words from Sefer HaTanya which declare that the cornerstone of Yiddishkeit is elevating the soul above the body. If people will find that our music contributes to that pursuit, mission accomplished!”

The album is distributed by Aderet Music  and will be  available on www.MostlyMusic.com, iTunes and wherever Jewish music is sold this coming Monday.