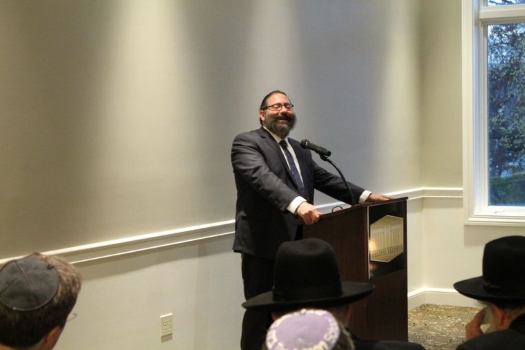 Renowned Chabad lecturer and writer Rabbi Yossi Jacobson was the keynote speaker at an honorary dinner hosted by the Telshe Yeshiva in Cleveland, Ohio.

The Telshe Yeshiva hosted several guest speakers who discussed their experience with the internationally known Orthodox institution for Talmud and Torah study during an honorary dinner Oct. 30 at Acacia Country Club in Lyndhurst. The evening also featured an informational video presentation about the school and catering by Davis Caterers.

“It has really been a tremendous effort to get this collection of great people and great Jews in Cleveland together to learn about Telshe Yeshiva,” David Heller, a student of Telshe Yeshiva for about 14 years, said as the presentation began.

Brooklyn, N.Y. native Rabbi Yosef Yitzchak “YY” Jacobson, founder and teacher at theyeshiva.net and former editor in chief of the Algemeiner Journal, served as the keynote speaker. Widely known for his dynamic and passionate style of communication, Jacobson spoke about the significance of studying the Torah and its relevance to Jewish identity.

“The Jews did not become a people in Israel,” Jacobson said in his speech. “Where did the Jews become a people? As nomads in the desert. So what connected them? What linked Jewish people to their origin? The answer is an idea, a book. Not physical, but an idea, a book. We call it the Torah. This is what formed our identity … because when your identity begins with the soil, when you’re exiled, it’s lost. (The Jewish people) take their homeland wherever they go. The book, the text, the Torah is alive in their mouths, in their minds, in their hearts, in their homes (and) in their communities.”

Rabbi Sruly Kavel, program director at the Jewish Learning Connection of Cleveland, spoke of the yeshiva’s legacy in his family, beginning with his great uncle, who attended the school in the 1940s. His father spent 10 years in the yeshiva from 1960 to 1970.

Telshe Yeshiva was founded in Telsiai, Lithuania in 1875. When Lithuania fell to the German military during World War II, many students and faculty members fled the area. The school was rebuilt in Cleveland in 1941. Its current campus is at 28400 Euclid Ave. in Wickliffe.