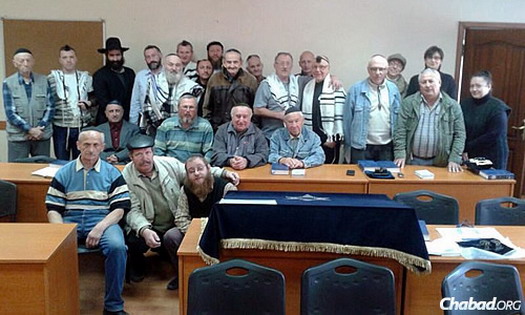 As heavy rocket and artillery fire pounded the eastern Ukrainian city of Donetsk last week, teachers at the city’s Ohr Avner Jewish Day School rushed their students into a room in the building’s center, where they silently waited for the barrage to end. Classes were dismissed early that day, and the 20 children in attendance—a small fraction of the amount the school had before the war—were sent home for the rest of the week.

Fortunately, the only damage suffered at the school was some falling plaster and jangled nerves. There have been, however, dozens of deaths recorded as fighting continues daily in and near the city.

“Usually, most of the fighting takes place on the outskirts of the city, and it is rare for anything to land in the city center,” says Rabbi Aryeh Shvartz, 31, a Chabad emissary who serves as assistant to Donetsk’s chief rabbi and head Chabad emissary Rabbi Pinchas Vishedski. “Last week, it was heavy everywhere. One day there was five minutes straight of constant bombing; the whole city shook. Many people died here last week.”

Donetsk’s airport continues to be the scene of some of the war’s heaviest fighting–despite the ceasefire agreed to in Minsk on Sept. 19th,–as pro-Russian fighters attempt to capture the airport, the Ukrainian military’s last stronghold in the city. The airport remains in Ukrainian hands, and until last week almost all military action took place near and around it. It was the first time that the city center itself was hit, sending even some of the most jaded of Donetsk’s citizens running for cover.

‘To the Synagogue and Back’

Although the school was closed during the worst of the shelling, Donetsk’s synagogue—which Shvartz has been appointed by Vishedski to temporarily oversee—continues to function, albeit at a diminished capacity. A large percentage of the Donetsk’s citizens have fled, but an even larger proportional amount of its Jews have left—between 80 percent and 90 percent—leaving behind mostly the elderly.

Still, some 110 people attended services on Rosh Hashanah, and nearly as many turned out for Yom Kippur. About 50 people came to services each day of Sukkot, Shemini Atzeret and Simchat Torah, the joyous holidays that comes at the conclusion of the Jewish month of Tishrei.

“We have, thank G‑d, a minyan every day,” reports Shvartz of the quorum of 10 Jewish men needed to pray, “but the atmosphere is quite heavy here. People do not walk around freely because they know that all of it can start again at any moment. I go from my house to the synagogue and back. Others go from their home to work and back. That’s life here now.”

As a result of the heavy fighting in the city center, the windows of many homes have been blown clear out of their frames. The synagogue also suffered some minor damage—a crack now appears on one of the building’s walls. Like the school, the synagogue does not have a basement underneath it for protection in case of a heavy attack. Shvartz, who spent most of the summer in Donetsk as well, recalls one particularly intense day of fighting in the summer when everyone at shul huddled together in the small basement room under the synagogue’s kitchen.

“One member of the community came back here from Israel for a few days at the end of Sukkot to see how things were going and whether it was safe to return,” reports Shvartz. “We were expecting him in the synagogue for Simchat Torah; it ended up that he was stuck in his basement the whole holiday because of fighting in his neighborhood. I drove him to Dnepropetrovsk on the Sunday after the holiday, and he went back to Israel.”

Shvartz, who stays in close daily contact with Vishedski, says that the city has calmed down in the last few days, with the fighting returning to the area around Donetsk’s airport. School reopened on Monday; and there are even plans for the Jewish community’s preschool to reopen in the coming weeks.

Nonetheless, Shvartz says everyone knows they must remain vigilant.

“It is scary here even when it’s calm; you have to be careful at all times. All anyone talks about here is war, and all they want is for all of this to end.”