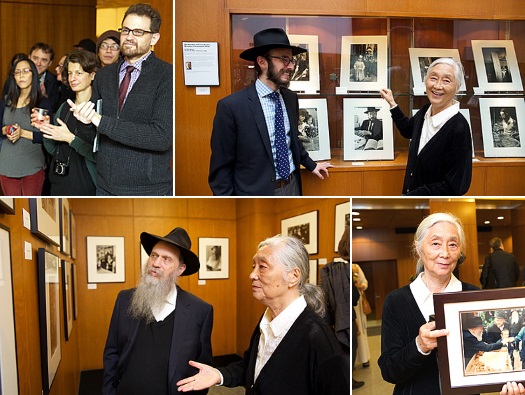 The path to New York almost always comes with one story or another. In the case of Chie Nishio, it turns out to be a photographic one.

The 84-year-old was trained as a documentary photographer in her youth in Japan. She was married to a Jewish journalist for 40 years whose great-grandfather was very religious, and Nishio took an interest in Orthodox Judaism.

In fact, that interest led her to Brooklyn.

“First, I went to Williamsburg, but in Williamsburg, people were looking at me, ‘What is she doing here?’ I couldn’t communicate with anyone, so I was looking for some other community and someone suggested Crown Heights, [which was] more open, more friendly,” she said.

The artist found that to be true. Over the course of several years in the late 1980s and early 1990s, Nishio focused her lens on the Crown Heights Chassidic community, creating a broad and intimate portrait of a very special religious community that embraced her and granted her access to their lives.

“Many people invited me to their house, their home, and talked to me,” she related. “You see the pictures; you get the idea.”

Those pictures now form an exhibit of more than 200 black-and-white prints on display at the Brooklyn Public Library. They include thoughtfully composed formal portraits, along with lively documentations of a broad range of the daily rituals of Chassidic Jewry in the Crown Heights neighborhood.

Nishio took many photos of the Rebbe—Rabbi Menachem M. Schneerson, of righteous memory—which makes the exhibit especially compelling this year, the 20thanniversary of the Rebbe’s passing.

At the exhibit’s grand opening last week, Rabbi Motti Seligson, director of media relations for Chabad-Lubavitch, had the chance to present Nishio with a framed gift—a photo of her receiving lekach (honey-sweetened holiday cake) 26 years ago from the Rebbe himself. The photo is part of the extensive collection of media images, video and more documented by Jewish Educational Media (JEM), whose executive director, Rabbi Elkanah Shmotkin, also attended the event.

Nishio actually spent a great deal of time with Seligson’s family while she was shooting her work two decades ago; as with numerous families in Crown Heights, they opened their home to her and welcomed her requests. In fact, a young Seligson is portrayed in one of the photos currently on display.

“Pictures are very powerful, and her pictures are of the Rebbe and the community that is centered around his teachings,” explained Seligson. “She got a deep look into the community. Good photographers, they capture a moment, and Chie, she really tells a story.

“The Rebbe would teach that everything that was created in the world should be used for a positive purpose—images as well, media as well—and that’s very much what Chie did with this exhibit and much of her work, all of her work,” he said.

As to why she is showing her work all these years later, Nishio said her husband passed away two-and-a-half years ago after a long sickness, and only recently has she had the time to organize something like this, even though she used to show her work almost every year in New York galleries.

“I have time again; my time has come,” she said. And “I’m interested in everything, what happens in human society.”

Chie Nishio’s “Hasidim of Crown Heights” exhibit at the Brooklyn Public Library, 10 Grand Army Plaza, runs through Feb. 1. It is free and open to the public. For more information, visit the library’s web site here.