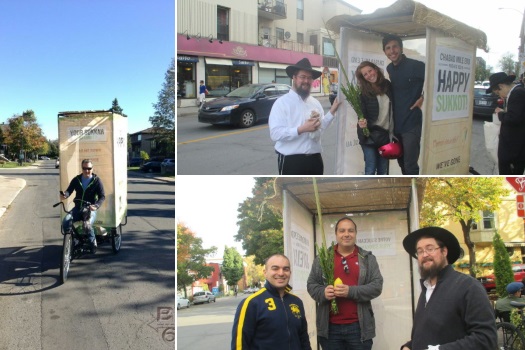 Hundreds of Jews across the island of Montreal were able to shake the Lulav and Esrog on Chol HaMoed Sukkos thanks to an environmentally friendly alternative to the traditional Sukkahmobile.

The Pedi-Sukkah is a Sukkah on a trolley that is attached as a trailer to the back of a bicycle. As Sukkos is a “green holiday,” it is an appropriate way to bring the Mitzvah of shaking Lulav and Esrog to people around the city. It also has better accessibility than a Sukkahmobile, as one can ride the bicycle through parks and up to people’s doors. Finally, an added benefit is that Jews and non-Jews are more prone to chat about the Sukkah and discuss topics they wouldn’t normally talk about with a Rabbi in the street.

This year, Pedi-Sukkahs were seen all around Montreal, with Chabad Rabbis in the Old Port, Hampstead, downtown and in Outremont riding the streets to visit community members at home and at the office.

More than 130 Jews shook Lulav in a Pedi-Sukkah ridden by Rabbi Yudi Winterfeld of Chabad of Mile End. “It was non-stop on Thanksgiving Monday,” said Rabbi Winterfeld. “People were stopping us in the street. I couldn’t make a phone call without having to hang up in the middle.”

The result: many fascinating discussions, and a full house at his Simchas Torah party. Bit it wasn’t only Jews who stopped Rabbi Winterfeld. “The non-Jews were also very happy with the Pedi-Sukkah,” he noted. “They liked the idea and the openness.”

The Pedi-Sukkahs are back in storage now, but they’ll be on the streets again for Chanukah, only two months away.