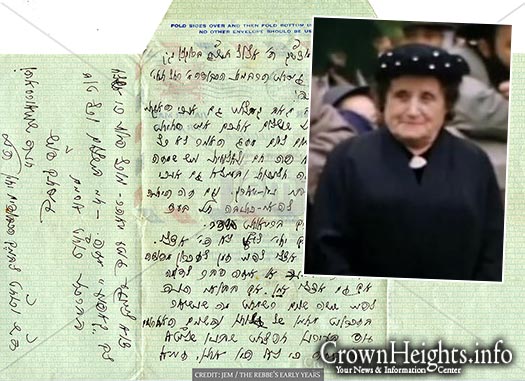 In honor of Vov Tishrei, which this year marks 50 years to the passing Rebbetzin Chana, CrownHeights.info presents a never before seen letter written by Rebbetzin Chana, which includes new information pertaining to her famous memoirs.

The letter is one of over 1,000 documents on the Rebbe’s early life – dozens of them never-before-seen – to be presented in JEM’s forthcoming book, The Rebbe’s Early Years, by Rabbis Boruch Oberlander and Elkanah Shmotkin which is expected to culminate in 5775.

As she informs her sister-in-law that she plans to send her niece a copy of her memoirs, she reveals the reason why the memoirs were written in the first place:

“When I arrived in the United States six years ago, I wrote what remained in my memory of [my husband’s] life in exile and of his final years in our city [Dnepropetrovsk]. I [wrote it down, because I] wanted his sons to know this, since they were not with him – may they live for many good, long years. I might send you a copy of it.”

It should be noted that Rebbetzin Chana’s memoirs were originally published between 5737 and 5753 in Toldos Levi Yitzchok, Eim Beyisroel and Tzadik Lamelech from this typed copy, which Zelda herself gave to Rabbi Zev Katz.

Rebbetzin Chana maintained a steady correspondence with Rebbetzin Rochel and Zelda until her and Rebbetzin Rochel’s passings in 5725. The Rebbe himself corresponded with them as well throughout the years until 5744, when Zelda passed away.

The years-long research effort invested by JEM into The Rebbe’s Early Years book has brought many new discoveries, and anticipation continues to build until the books release by Kehot Publications in 5775.