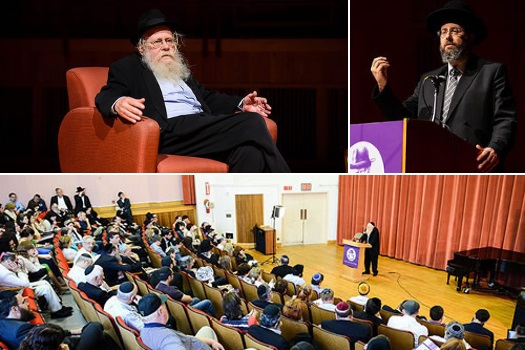 Nearly 1,000 Gather to Reflect on the Rebbe

The room rang with applause. It was the encouragement of 500 or so people, who crammed the auditorium at Queens College’s Kupferberg Center for the Arts in New York City on Sunday night for the plenary session of the day-long program “Soul Encounters: A Journey of Connection, Reflection and Upliftment.” Attendees were enlightened and enthralled by Jewish leaders, educators and lecturers about the Rebbe, Menachem M. Schneerson, of righteous memory.

They had gathered from near and far to participate in this event commemorating the 20th yarhtzeit of the Rebbe, who passed away on the third day of the Hebrew month of Tammuz, which this year was observed on Tuesday, July 1.

For many participants, the event also served as the culmination of a six-week course on the Rebbe’s teachings that had been offered this spring in more than 700 cities through the Rohr Jewish Learning Institute. Titled “Paradigm Shift: Transformational Life Teachings of the Lubavitcher Rebbe,” the JLI course took more than 18 months to create, incorporating the work and advice of 40 different scholars.

“It allowed Chabad rabbis to come with members from their communities to spend the day steeped in the Rebbe’s teachings,” said JLI director Rabbi Efraim Mintz.

Several talks at a time were open to participants from morning until night, with the plenary session and a buffet dinner ending the proceedings. Throughout the day, groups also visited the nearby Ohel—the resting place of the Rebbe and his father-in-law, the Previous Rebbe, Rabbi Yosef Yitzchak Schneersohn, of righteous memory. According to Mintz, an estimated 1,000 people in all took part in the day of study and reflection.

“What the Rebbe did was impressive,” attested Eduardo Elsztain, chairman of the World Jewish Congress Governing Board, who arrived from Jerusalem on Sunday and listened to the speakers from the front of the room. “I think the Rebbe, the strength of his leadership, was to make the Jews shine, to give power to every Jew.”

Professor Lawrence H. Schiffman, vice provost for undergraduate education at Yeshiva University in New York, kicked off the first session at 11 a.m. with a talk called “In the Jewish Hall of Fame: The Rebbe on the Backdrop of History’s Greatest Scholars.”

The final plenary session began after 5 p.m., with participants packing the first floor of the auditorium—even spilling over into the balcony—as those assembled heard from Rabbi Yehuda Krinsky, chairman of Merkos L’Inyonei Chinuch, the educational arm of the Chabad-Lubavitch movement; Rabbi Moshe Kotlarsky, the vice chairman of Merkos; Chief Ashkenazic Rabbi of Israel David Lau; and renowned Talmudist Rabbi Adin (Even-Yisrael) Steinzaltz, author of the newly published and highly acclaimed book My Rebbe, who was interviewed as he sat in a large armchair on stage.

“I wanted to make people aware of the Rebbe in general,” said Steinsaltz of his talks during the day, “to connect them with something that has to do with their own lives—to touch them and to make them move.”

“The Rebbe teaches that the antidote to smugness is to realize just how little time, just how few moments we have to accomplish that which we must in this world, and the knowledge of what there is to be done,” explained Slonim, citing the urgency the Rebbe recognized in fulfilling one’s mission in life.

“We have been given gifts, talents, abilities; we have been given an assignment that touches G‑d’s essence, for it is the deepest desire that we transform this world, that we unmask its unifying force and make its surroundings reflective of its nexus.”

The Rebbe asked people to look beyond themselves, and at what they have done for the world and for the Creator to advance his plan, she explained to the crowd. He expected people to accomplish much in their various spheres, she said, and to “seize each moment.”

They Came Away Connected

“The Rebbe’s just such a key figure,” said Tamar Walker, who attended with a four-person delegation from Philadelphia. “This was such a wonderful opportunity to learn about him and his work.”

She said she left especially moved by the call to action; speakers throughout the evening’s plenary session discussed the work to be done in moving the Rebbe’s vision ahead. “It’s one thing to have insight, greater understanding. But we have to actually put into action what we learned.”

Walker looks forward to growing in her Jewish observance and also deepening her knowledge of Jewish practice. Overall, she said, she came away connected more strongly. “The fact that the Lubavitch movement has grown in 20 years shows me there’s something real about it. That’s a reason to carry on the work.”

Stephanie Ben-Salem, who also traveled from Philadelphia to attend the event, also came away motivated by a fundamental message. “The Rebbe saying, ‘When your day is done, do more,’ ” left a significant impression. “I want to do more,” she said.

Rabbi Shmuel Lew, head of education at the Lubavitch Foundation in the United Kingdom and longtime head of the Lubavitch Girls School in London, gave a presentation titled “Service at the Rebbe’s Behest: Daring Escapades in Greenland and Communist Russia.” He said he hopes people came away better able to appreciate their own potential and “to find their inner neshama [soul].”

Barry Feigenbaum of Huntington Station, N.Y., noted that Lew’s session was quite memorable. He said he came away struck by how the rabbi overcame various challenges in his life and continually rose to the occasion—whether it was trying to bring matzah into Russia or navigating Greenland for Yom Kippur.

“There are always lessons to learn,” stated Feigenbaum. “For me, it’s like going up a ladder. It’s not just learning from my sefarim [religious books], but to hear personal experiences—not just what’s in the books, but where you synthesize everything.”