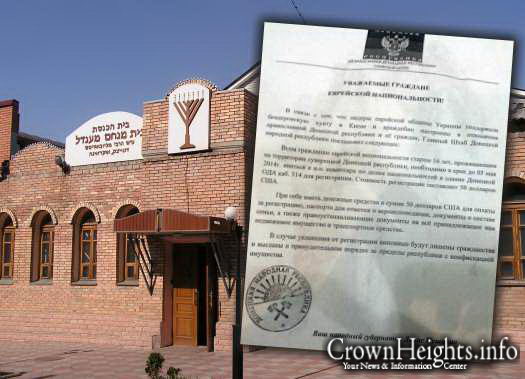 It was the second night of Passover, and the evening prayers had just concluded at the Beis Menachem Mendel Synagogue in Donetsk, Ukraine. Hundreds of worshippers in this border city with Russia were milling around, waiting for the second night’s community Passover seder to begin.

Just then, three or four masked men entered the synagogue and began distributing ugly, anti-Semitic fliers, ordering the city’s Jews to register and pay a $50 fee at a central office or risk having their “citizenship revoked, face deportation and see their assets confiscated.” The ominous leaflets were signed by the self-proclaimed pro-Russian Donetsk People’s Republic.

“The first minute the reaction was terrible,” said Rabbi Pinchas Vishedski, Donetsk’s Chabad representative and the synagogue’s rabbi. “But when people began reading the letter and saw its contents, it was so ridiculous; we saw that it was obviously a provocation.”

The paper, addressed to “Ukrainian citizens of Jewish nationality,” demanded that all Jewish citizens aged 16 and over register in Room 514 of one of the buildings controlled by pro-Russian separatists by May 3. When one local Jewish community member tried to test the legitimacy of the flier by following its instructions, the central office listed on the paper denied any knowledge of it.

Donetsk is a large, gray industrial city straddling the Russian border in eastern Ukraine and has been the site of some of the heaviest unrest in recent weeks. Pro-Russian separatists headed by Denis Pushilin—whose name was printed on the bottom of the flier—occupied central government buildings and declared an independent republic in the region on April 7, a move that has remained widely unrecognized.

“In the year 2014, after all of the miles traveled and all of the journey of history, this is not just intolerable—it’s grotesque,” Kerry was reported as saying. “And any of the people who engage in these kinds of activities—from whatever party or whatever ideology or whatever place they crawl out of—there is no place for that.”

No Spike in Anti-Semitism

The pro-Russian separatists were quick to deny any connection to the fliers, dismissing them as a hoax. Speculation of who was the true source of the fliers has run rampant, with some blaming Russia and its supporters, saying they are simply trying to raise hysteria in order to further destabilize the region, and others accusing the new government in Kiev, accusing them of fabricating the papers as a way of discrediting the Donetsk separatists.

With all of the regional turbulence, however, Vishedski—who arrived in Donetsk two decades ago with his wife, Nechama Dina—says that he has not seen any spike in anti-Semitism.

“Anti-Semitism is low here at this time,” said Vishedski, “that’s why I think this was just a cheap provocation. We are against anyone, on any side of this conflict, trying to use the Jewish community for their own political needs. It’s not a joke. The Jewish community must remain out of the game.”

Vishedski described the seder that followed as calm and relaxed, but noted that since the turmoil began, more people have been attending synagogue. “We had hundreds of people each night of Pesach; there was definitely an influx of people this year. The first night we had five sederim here,” he said. “The situation remains tense here, and I spoke about having faith and trusting in G‑d that everything will stay safe and turn out for the better.”

He did, however, say that the Jewish community was taking the fluid political situation and potential fallout seriously: “We have to remain vigilant. After Pesach, our kindergarten and school will be opening again, and we will be adding extra security. We don’t have money for it, businesses here have been stalled for months, but Hashem will help us.”

‘No One Knows What’s Going On’

Lugansk is another eastern city in Ukraine that sits on the Russian border and has been in turmoil in recent weeks.

“Lugansk is not quiet,” wrote the city’s rabbi, Chabad representative Rabbi Sholom Gopin, in a pre-Passover email. “Main roads are closed, demonstrations are increasing, and a question mark hovers in the air: Russia or Ukraine?”

Gopin said that he, too, has seen an influx of attendance over the last few weeks and during Passover. People have continued to come despite the synagogue’s central location, just meters away from the most serious demonstrations in the city’s center.

“Pesach was very nice, a lot of people came, and we had larger-than-expectedsederim,” said Gopin.

Two hundred miles to the northwest, in Ukraine’s second largest city of Kharkov, the situation remains quieter than in Donetsk and Lugansk, but still unstable.

“It’s tense. There are Russian troops on the border, on weekends there are big demonstrations, it’s very uncertain,” said the city’s chief rabbi, Chabad representative Rabbi Moshe Moskowitz. “Demonstrators come and some people say they are locals; others say they’re not from here. No one really knows what’s truly going on.”

Yet when Passover set in on Monday night, the majestic, glowing Choral Kharkov Synagogue was filled to capacity, shining a bright light onto the city’s central Pushkinskaya Street.

Clinking glasses, the Jews of Kharkov leaned to the left, according to custom, and drained their wine.