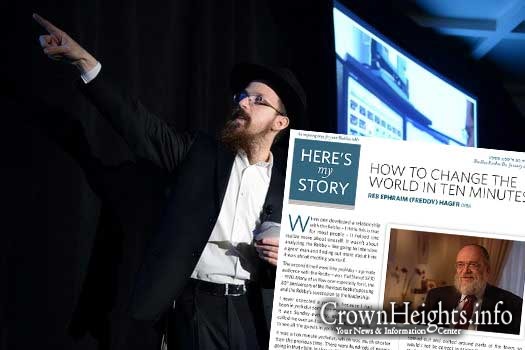 It began one Shabbos last winter, when members of the Union Street Shteibel in Crown Heights were treated to a story of the Rebbe at their weekly Kiddush. Rabbi Elkanah Shmotkin, JEM’s director, had heard a fascinating story of the Rebbe which had recently been recorded in a My Encounter with the Rebbe interview, and he shared it with his fellow congregants.

The following week, he told another story – and then again the next week. The congregants began to expect a story every week, and a tradition was born. “Not every story was what you’d call ‘earth-shattering.’ Some were the ‘small stories’ which display the Rebbe’s keen sensitivity, and some were truly astonishing,” recalls Rabbi Shmotkin.

After learning that the stories were being repeated at kiddushim and Shabbos tables, Shmotkin asked Rabbi Yitzchok Tsap, Living Torah’s director, to keep an eye out for interesting stories. “It became a kind-of weekly challenge to find a story every week,” says Tsap. “Some came from new interviews which we had just conducted, and others were culled from the 20,000 transcribed pages of interviews, stories, and guidance. But they were all told by first-person participants.” Without fail, over the course of a full year, the stories kept on coming.

Then Shmotkin recalled something he had heard from the philanthropist Mr. Sami Rohr, and an idea began to form. When a charitable endeavor by Rohr’s son George, the noted Baal Tzedaka, met with particular success, Reb Shmuel urged his son to expand it; in his words – “Roll it out!”

Together with Rabbi Yechiel Cagen, director of the My Encounter with the Rebbe project, Shmotkin envisioned “Here’s My Story,” a weekly printed story of the Rebbe that would be distributed in Shuls, Chabad Houses, and at Shabbos tables across the world.

Rabbi Cagen transformed the vision into a reality; designing a clean, clear format, and engaging an editor to prepare the stories for print. Cagen, who manages the project’s staff, captures new testimonies, and covers the project’s sizable expenses, shrugged when asked why he jumped into a new weekly commitment. “It’s pretty straightforward,” he explains. “We’ve already done the hardest part; capturing the testimony. Why shouldn’t we help another few thousand Shabbos tables to enjoy a great story?”

Plus, he explains, it’s win-win: “This might light a fire under us and help us capture record more interviews.”

Here’s My Story, a weekly inspiring story for your Shabbos table,a print-ready weekly sheet for Shuls and Chabad Houses, will be launched for Yud Shevat. To receive the first edition in time for Shabbos Parshas Bo, please email mystory@jemedia.org.