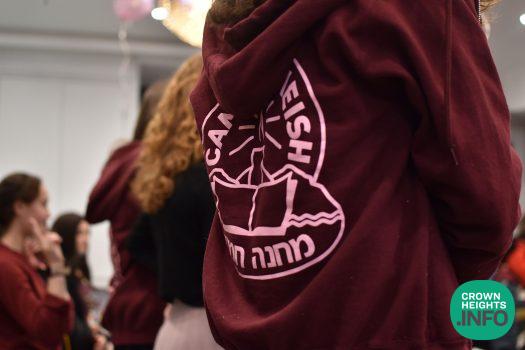 Ever wonder how one summer’s inspiration can last the whole year? For Camp Chomeish campers, a reunion evening showed just how great an impact one summer can bring!

Over 100 girls from all around the US and Canada reunited this past Sunday in honor of Chof Beis Shvat to meet with their camp friends, relive their favorite experiences, and reinvigorate their efforts in the many year-round Camp Chomeish initiatives. Memories of past summers joined with the excitement for the coming summer!

“The warm head staff from the past year created an event filled with the chayus, energy, and inspiration Camp Chomeish girls have come to expect,” said Director Mrs. C. M. Rivkin. Familiar songs were sung arm-in-arm with reunited friends, infusing the room with the energetic camp spirit. Photos and Video brought back camp memories and had the girls laughing out loud at their favorite summer moments.

The ruchniyus from Camp Chomeish never ends. Camp Mashpia Morah Blumi Mishulovin beamed that “since the summer, girls continue to go on Mivtzoim together every single week! On Shabbos Mevorchim, girls continue saying their Tehillim quota, being rewarded with a special monthly raffle that drew 7 lucky winners.”

At the end of each summer, the girls choose a hachlata to keep for the entire year. During the reunion, a hachlata raffle for a prized Rebbe Dollar was drawn with every girl who kept her hachlata.

The hachlata cards were sent in to the Ohel, giving the Rebbe ongoing nachas from Camp Chomeish.

Although last summer is already a distant past and summer 5782 is fast approaching, the chayus and inspiration from Camp Chomeish continues to thrive in each camper as they prepare for the summer ahead! The reunion showed just how much impact one summer can bring.

Camp Chomeish has made a name for itself as the camp where everyone is family. “It’s not just a slogan,” says Rabbi S. B. Stock, Founder, and Executive Director. “It’s really the way the camp is run. BH we hear from campers, staff and parents, remarking how everyone is truly and individually cared for.”

The slow and steady success has helped Camp Chomeish grow tenfold in the past ten years, from a few dozen campers in 2013 (when they moved into their current grounds) to hundreds of happy campers. To keep up with demand, Camp Chomeish has slowly and steadily increased its capacity. Last summer, camp added 3 additional cabins and a newly renovated large cabin is being added this year.

One of the favorite specialties at Camp Chomeish are the Guest Rabbis/Rebbetzins that spend Shabbos farbrenging with the Pioneers and Staff. Past Guest Rabbis and visiting Shluchim include Rabbi Shimmy Weinbaum, Rabbi Yossi Yaffe, Rabbi Avrohom Sternberg, Rabbi Gershon Borenstein, Rabbi Yossi Brisky, Mrs. Yochved Aidelman, and more. To expand this great program, the new cabin will feature a 2-bedroom visitors suite for the Guest Rabbis and their families. It will also house new offices for Camp, Program and Health Directors.

Also new for this year, the second session will finish a few days early, and end BEFORE Shabbos. This is in consideration of many requests from out of state parents where the school year starts earlier than in CH, from staff that are preparing to go to Seminary and from local families that want the last weekend of the summer to spend together or travel.

Registration for Summer 5779 is in full swing and closes Purim Katan. Visit https://www.campchomeish.com/Reunion