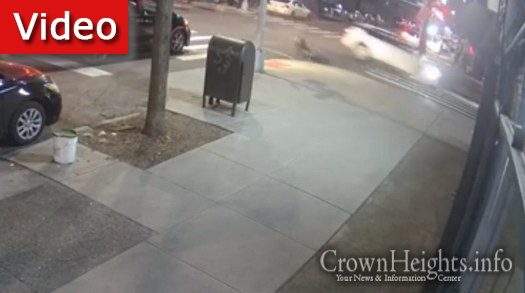 The moments of the horrific crash on Troy Ave and Montgomery Street Sunday night was captured on surveillance video and highlights the importance of cyclist safety.

As previously reported on CrownHeights.info, the incident took place Sunday evening when a cyclist ran a red light and was hit by a white Audi vehicle. The collision sent the cyclist – who was not wearing a helmet – into the car’s windshield and ultimately left him lying on the side of the street as his bike caught fire on the nearby sidewalk.

The surveillance video provided to Crown Heights.info by Troy Organic Cleaners gives additional details on the incident, showing as the biker passed a car waiting at the red light and drove into the intersection at a high rate of speed, not even slowing down to check for traffic.

The white Audi vehicle had also been traveling quickly, attempting to beat the yellow light as the signals changed. The driver stopped after hitting the cyclist and remained at the scene of the crash.

The video also shows as the bike comes to rest on the sidewalk, smoking slightly before exploding into flames.

The biker was critically injured in the crash and was rushed to the hospital by EMS.