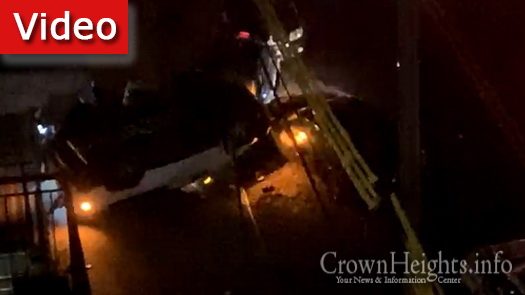 An SUV fleeing from a police traffic stop flipped onto its roof in Crown Heights Monday night, ending up on its roof and injuring four passengers.

The incident took place on Schenectady Ave and East New York at approximately 11:45pm, when the white SUV attempted to speed away from a traffic stop.

According to a witness, the SUV had been pulled over for a moving violation and began speeding off as the officer attempted to speak with the driver.

The SUV clipped a vehicle and hit a parked car before rolling over onto the sidewalk and coming to rest on its roof.

The driver then fled on foot with officers in pursuit, while the other four occupants of the vehicle were treated for injuries by EMS.