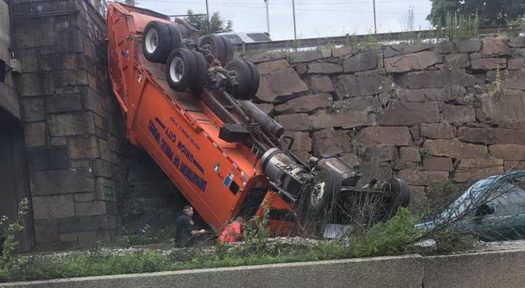 At least seven people were injured Wednesday when a garbage truck rolled off a New Jersey overpass and onto a roadway near the Lincoln Tunnel, snarling traffic on one of the busiest travel days of the year, according to reports.

The Union City Department of Public Works truck plunged off an overpass at Palisade Avenue and overturned onto Route 495 westbound in Union City around 1 p.m., a Port Authority spokesman said, according to NorthJersey.com.

The truck crashed into a BoltBus when it rolled off the overpass, according to the outlet.

Shocking photos show the orange truck flipped over and leaning up against a stone wall alongside the overpass.

Two people in the garbage truck were injured and taken to Jersey City Medical Center, while five people aboard the bus suffered injuries and were treated and released at the scene, the spokesman said.

The crash shut down Route 495 in both directions and suspended all bus service from the Port Authority Bus Terminal just as many people are traveling the day before the Fourth of July.

Traffic at the Lincoln Tunnel to NJ is being held due to a crash on NJ-495 with the exception of vehicles exiting the bus terminal. Use GWB or Holland. [01]