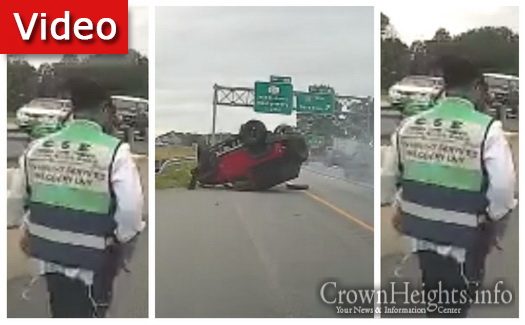 A Chesed Shel Emes volunteer was the first person to render aid when a car overturned on the 17 Monday. The volunteer was able to removed the trapped occupants in a massive Kiddush Hashem.

Yehuda Leib Weiss, a Pupa Chosid and Chesed Shel Emes volunteer, was on his way to traffic court Monday, when he came across the overturned vehicle on the side of the 17 near exit 120.

The incident was caught on his vehicle dash-cam, and shows as he rushes over to the overturned vehicle, and discovers that the occupants were trapped.

According to YeshivaWorldNews, the occupants had been unable to get their seat belts off, and had begun turning blue. Weiss cut the seat belts, and rescued the occupants.

In an interview with YeshivaWorldNews, Weiss said that the ticket he was heading to fight had actually been given as he was on his way back from erecting Matzeivos at the Chesed Shel Emes Cemetary in Woodridge.

Upon arriving late to the court, Weiss reportedly told the judge what had happened, and was praised for his actions. The ticket summons was also dismissed.