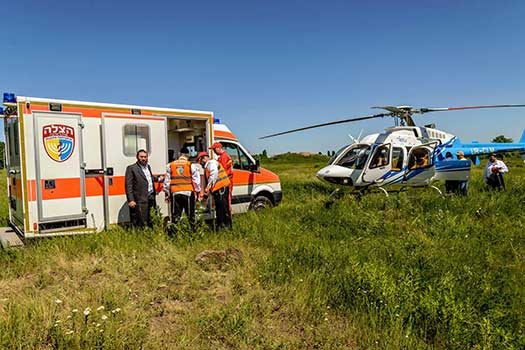 Three Lubavitcher girls working as counselors in a summer camp in Ukraine were injured after the car they were traveling in was involved in a crash. One of the girls was airlifted to Israel for medical treatment and is listed in critical condition.

The incident occurred on Sunday when three American camp counselors were travelling to Hadtich to visit the gravesite of the Alter Rebbe. On the way, the vehicle they were traveling in was involved in a violent crash, r”l.

“A police car was chasing another car when their driver got confused and instead of moving out of the way he suddenly stopped and was rear ended” reported Bechadrei Chareidim. Three girls that were traveling in the car were injured, one of them critically.

R’ Hillel Cohen of Hatzalah Ukraine said “the girls were taken to a local hospital for medical treatment and were escorted by Rabbi Shlomo Wilhelm, who is the Shliach in Zhitomir, Ukraine. After consulting with medical experts in the United States and Israel, it was decided to airlift one of the patients to an Israeli hospital for better treatment.”

The counselors were working in Camp Gan Yisroel in Chernigov, Ukraine, headed by Rabbi Yisroel Silberstein.

The other two counselors were released from the hospital and are reportedly ok, while the third girl remains in an intensive care unit in the Sheba Medical Center in Israel.

Update: The condition of the girl who was airlifted to Israel has been upgraded to stable, b”h.