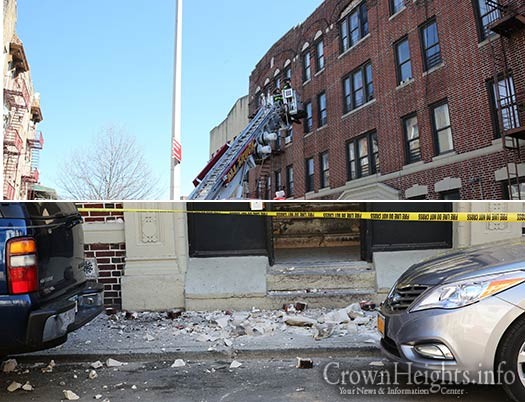 A part of an apartment building’s facade fell apart and large chunks of bricks and cement came crashing down on a sidewalk four stories below. The building, which is owned by a group of investors, has a history of being neglected and repairs not being made.

The incident occurred on Lincoln Place near Troy Avenue at around 2:30pm when a portion of a facade above a fourth floor window in 1226 Lincoln Place came loose and crashing to the ground, leaving large chunks of bricks, cement and rusted metal littering the sidewalk in front of the building.

The debris appeared to have come from a section above the center windows of the fourth floor, above the buildings main entrance.

The building, which has 31 residential units, was purchased in August of 2015 by Vinegar Hill Asset LLC for $7.13 million. Vinegar is an LLC which appears to be controlled by Inception Investors LLC, which describes itself as a “private real estate investment and operating company” and lists some 32 buildings with 403 units under its ownership.

Their website lists three partners behind the LLC including Ryan Colbert, Cheskel Engel and David Lubin as co-founders and managing members, along with an address on 16th Street in Boro Park.

This building has a long history of neglect and failure to properly maintain the nearly 100 year old building by both the previous owners and now the current owners.

In December of 2008 a resident made a complaint to the buildings department about the very same bricks above the windows that were bulging. An inspector served a violation and a $1,000 fine, but no corrective measures have ever been recorded.

Other defects that were noted over time were many issues relating to ailing brickwork, lead paint, and dangerous fire escapes. So much so that the city stepped in a number of times and order work be done on the most egregious issues, totaling over $50,000.

Nevertheless, many additional issues were clearly visible all over the font of the building – with most of the front windows lentils rotted away. “It is only a matter of time before another section of the building will fall down” said a frustrated neighbor, adding “will it take someone getting greviusly injured or worse for the owners and the city to do something about it?”

Using a bucket truck, firefighters ascended to the fourth floor windows where the facade collapsed and inspected it for further damage. The department of buildings was called to take over the investigation.