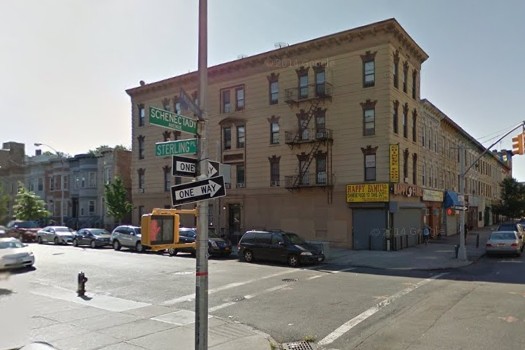 The scene of the accident

A teen driver who fled police after officers smelled pot coming from his car fatally struck a 21-year-old pedestrian in Crown Heights early Monday morning, according to an NYPD report.

From DNA Info by By Rachel Holliday Smith and Gwynne Hogan:

Raymond Ramos, 18, was driving near Schenectady Avenue and Sterling Place just after midnight on Monday when he was pulled over by NYPD officers who smelled marijuana coming from his vehicle, according to police.

As the officers approached, Ramos drove away. With police in pursuit, Ramos made it seven blocks before his car collided with another vehicle at the intersection of Nostrand Avenue and St. Johns Place, police said.

Both cars barreled up onto the sidewalk fatally plowing into a pedestrian who was walking north, a preliminary investigation by the NYPD showed.

Dave Jones, 21, was taken to Kings County Hospital, where he died of his injuries later that that day, police sources said.

Ramos was arrested at the scene and is expected to be arraigned on charges of criminally negligent homicide and vehicular assault, according to police and prosecutors. He is also expected to be charged with reckless endangerment, unauthorized use of a vehicle and disobeying a traffic light, police and the Brooklyn District Attorney’s office said.