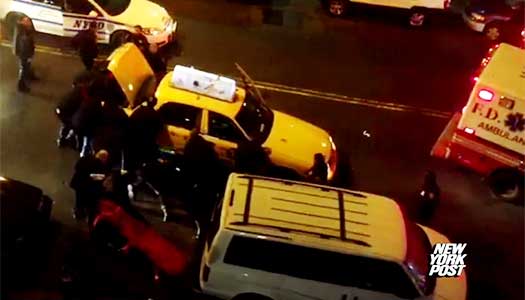 They’re the Finest, and they may be the strongest, too. About a dozen cops lifted a taxi off a pedestrian who was run over early yesterday morning in the South Bronx.

A video that captured the feat of strength showed the unidentified victim pinned under the sedan.

So the quick-thinking cops surrounded the car at East 138th Street and Brown Place, flexed their muscles and lifted the vehicle several times until EMS workers were able to pull the man away shortly after 2:30 a.m.

The victim was taken to Lincoln Hospital, where he was listed in critical condition.

Cops were also investigating an early-morning accident in Brooklyn in which an SUV jumped a curb and injured a woman.

The 55-year-old pedestrian was rushed to Brookdale University Hospital in critical condition after a Ford Explorer sped across a bus stop where she was standing on Louisiana Avenue, police said.