« Op-Ed: It Just Ain’t Worth It
Alternate Side Parking Rules Suspended Tuesday » 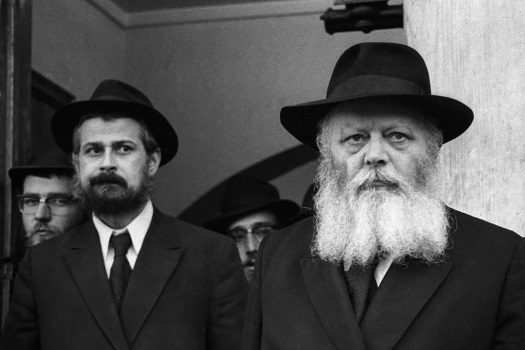 Noted writer Bentzion Elisha transcribed the following story he heard from Rabbi Nachman Twersky at a Farbrengen for Gimmel Tammuz, with the intention of sharing it with the broader community.

Even though Rabbi Binyamin Klein was known as an ‘Ish Hasod,’ ‘a keeper of secrets,’ concealing behind-the-scenes experiences he was privy to see as the Rebbe’s Mazkir, private secretary, I once asked him to please tell me ‘something’ new.

Although he was asked to keep to himself whatever he saw working so closely for the Rebbe, nevertheless, not everything was a secret.

“Alright, I’ll tell you about a phone call I just received last night. But before I do, let me give you a brief introduction to it.” Rabbi Klein said, opening up.

“About two years ago I received a phone call from Shea P. of Manchester, England. Shea and I were both in the same Cheder when we were kids in Jerusalem. He heard I’ve become a Mazkir of the Lubavitcher Rebbe and that’s why he has called. Unfortunately, his daughter was married for nine years without having merited giving birth to even one child. Even though they went to various Rebbe’s and doctors for help, sadly, nothing helped.”

“He heard that the Lubavitcher Rebbe literally ‘gave out children’ to many people with his blessings. Perhaps you could use your close position with the Rebbe and nudge him on my behalf to bless my daughter. I explained to him that in Lubavitch it is different than it might be in some other Chasidic courts and I cannot ‘push’ the Rebbe in any way using my position to give special favors. However what I can do is to present you to the Rebbe if you come to Crown Heights on a Sunday when the Rebbe distributes dollars for Tzedaka. There you have a good opportunity to ask for a Bracha for your daughter. He immediately agreed, and came to Crown Heights from England for a visit, shortly thereafter.”

“The Sunday he came, when his time came for his turn in the long line, I presented him to the Rebbe like I promised. After briefing the Rebbe about how his daughter was married already for nine years yet was still childless, proclaiming she had waited more than enough, than he proceeded to ask the Rebbe for a Bracha that his daughter will give birth to a child. The Rebbe in turn gave him three dollars accompanied with a blessing for children, in the plural sense.”

“Now that you have some background information, let’s get back to the phone call I received from Shea yesterday.” Rabbi Klein continued.

“First, he updated me as to the happenings with his daughter’s situation after his visit to the Rebbe two years ago. About a year after the visit, Shea’s daughter gave birth to triplets. In addition, just recently, she gave birth to yet another set of triplets!”

“Now that his daughter has six babies at home, and is quite overwhelmed, he decided to call me ASAP and convey to the Rebbe his great appreciation for his blessings, but to tell the Rebbe, enough!”

In 1995 I was in Manchester visiting my son who was studying there in Yeshivah at the time. In Shul there I happened to sit next to a man I started a conversation with. When he mentioned his name it took me by surprise.

My eyes lit up as I remembered his name from the story Rabbi Klein told me years back.

“Are you Rabbi Binyamin Klein’s childhood Cheder friend?” I asked.

“The same one who asked the Rebbe for a Bracha for his childless daughter who then went on to have two sets of triplets?” I inquired.

“Yes!” he reaffirmed yet again.

“So what happened next?” I asked curiously.

“After the two sets of triplets my daughter went on to have one more child. It’s interesting that when I received the Rebbe’s Bracha for children, he gave me three dollars which resulted in three pregnancies. My daughter now has seven children thanks to the Rebbe’s Bracha. Baruch Hashem.”

Writer Bentzion Elisha is the author of the book “18 Frames of Being,” a compilation of short soul stories. Available on Amazon https://www.amazon.com/18-Frames-Being-Bentzion-Elisha/dp/0991210808.

« Op-Ed: It Just Ain’t Worth It
Alternate Side Parking Rules Suspended Tuesday »