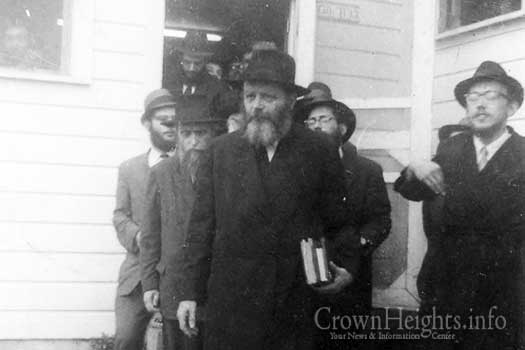 The Rebbe during a visit to Camp Gan Yisroel in upstate New York.

“Prior to the summer, the Rebbe would – almost annually – discuss the topic of Tznius,” says Crown Heights Mashpia Rabbi Michoel Seligson. At his suggestion, CrownHeights.info presents a weekly feature for the summer months: a short thought of the Rebbe on tznius, as compiled by Rabbi Seligson:

“King Solomon said ‘How good it is an appropriate word in the right time’ therefore although the following is a clear din in the Shulchan Aruch, now is the correct time and especially in the presence of many Jews, who will surely publicize it.

Since we find ourselves in the summer, which is a time that people go to the country, it is a great mitzva to publicize that the laws of tznius in the Shulchan Aruch, are relevant not only for the winter season but also for the summer months, not only for children but also for adults, and not only for general adults but also the greatest amongst the adults. Hashem should help us that it be a healthy summer, a kosher summer, and a healthy and enjoyable summer” (12th of Tamuz 5717/1957).

“The Talmud (Yuma 47a) tells us about the tznius of a woman named Kimchis, who said, ‘My hair was not exposed to the walls of my house. Therefore I merited that my seven sons served in the Bais Hamikdosh.’

Every Jewish woman needs to know these words of Kimchis. The chinuch of children and its’ conditions are dependent on the mother, the Jewish mother, more than on the father.

What is expected of her? Not that the house needs to be attended to with the fullest devotion, polished etc. but that ‘My hair was not exposed to the walls of my house.’

In addition, they need to be aware that the lot of their children is in their hands:

It is possible from above that the child of a certain woman is destined to be the Kohen godol [in a spiritual sense], and when the mother is lacking this conduct [‘My hair was not exposed to the walls of my house’] she is depriving her son of this great merit that is in his reach!

One should not figure to fulfill their obligation just with sighs and crying, but to implement it in a practical sense, and they will then merit healthy children physically and spiritually” (Shabbos Parshas Shmini 5716).

In a response the Rebbe wrote, “Based on the words of my saintly father-in-law, the Rebbe, the troubling instances that we have in the present time from the Jewish youth – result from being lenient in family purity and tznius (as mentioned in seforim).  .” (Kfar Chabad #746 pg. 13).

In a talk to N’shei Ubnos Chabad, in spring 5728/1968, the Rebbe stated that Jewish women and daughters in our time need to preserve their purity and sanctity in general, and in tznius and dress in particular.  They should not to be influenced by what is taking place in their environment and should not have a desire to model themselves after non-Jewish women etc. To supervise and exercise utmost caution that garment length should be in accordance with what is stated in Shulchan Aruch and not to shorten them. It is a mitzvah to publicize this (Sefer Mishvochai Horebbe page 29).