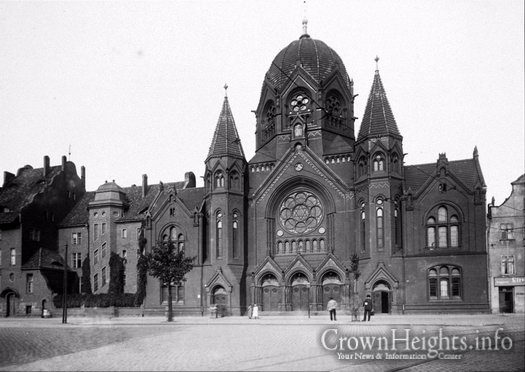 After many years of delay, government officials in the Russian exclave of Kaliningrad (which was formerly the German city of Konigsberg, annexed by Russia following WWII) approved the rebuilding of one of Europe’s most magnificent synagogues, which was destroyed on the eve of Kristalnacht in 1938.

The site of the to-be-rebuilt synagogue in Kaliningrad will be enlarged to include the creation of an entire Jewish quarter in its historical location, the project organizers said this week. The project is expected to be ready in 2017, after a long stalling period.

The rebuilding of the Konigsberg synagogue, one of the largest and most magnificent in pre-war Europe, was originally proposed five years ago, with the corner stone laid by Kaliningrad rabbi and Chabad emissary David Shvedik in 2011. The city administration, however, refused to issue a permit for the construction, citing various architectural and planning shortcomings as the reason. A bureaucratic battle between the authorities and the Jewish community than ensued, finally resolving last year, with the city granting permission for the construction.

The original Konigsberg synagogue was destroyed and burned under Nazi Germany’s rule during the Night of the Broken Glass (Kristallnacht) in 1938. The newly re-built Jewish quarter is planned to include a Holocaust memorial, and community institutions such as a school, a kindergarten, a community center and shops. “Historically, in Europe a city synagogue was always surrounded by communal infrastructure, so the idea of developing a Jewish quarter here is not something new,” said Rabbi Alexander Boroda, president of FJC Russia. “We hope this will once again become a center of Jewish life in the region,” he said.

The project is being carried out by the FJC in partnership with the Russian Jewish Congress and local sponsor Vladimir Katzman.