Shocking and disturbing video footage shows an NYPD Traffic Agent ticketing a school bus for standing in a “no parking zone” in front of a school, all while actively loading children onto the bus.

Video footage has gone ‘viral’ on social messaging apps showing a traffic agent issuing a $115 parking violation to a yellow school bus, that was actively loading children, at the conclusion of the school day today in front of the Skvere Talmud Torah on 45th Street in Boro Park.

Posted signs say “no parking between 7am and midnight on school days,” and the NYC.gov website clarifies explains “This means that you may NOT wait or stop to load/unload packages or merchandise at curbside. You may stop to expeditiously drop off or pick up passengers.” 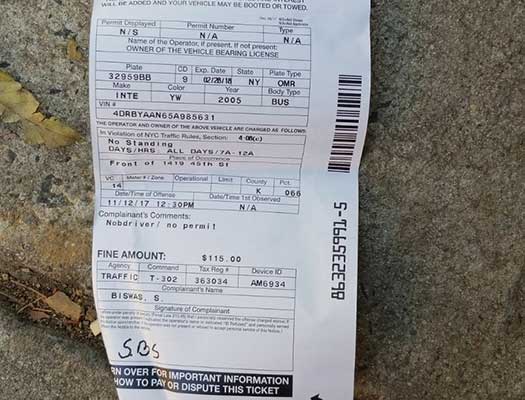 “You may stop to expeditiously drop off or pick up passengers.”

should be an easy win in court but why should anyone have to go through that hassle?

It’s not too much of a hassle. It can be done by mail and a well written letter with photos. That ticket was unfair.

true a bus can load and unload but he states in ticket that reason is for no bus driver present. I think that can be a violation and possible hazard to the children too.

hmm yeah that would be a problem. Everyone has to follow the rules and be there for the kids!

At the end of the school day? Multiple buses are often staged waiting for the kids. The teachers make sure kids get ok the correct bus. The drivers don’t have to be in their seats.

The driver MUST be present while a bus is loading/unloading. That ticket may be appropriate.

There is a word after no driver. It looks like permit. It does not say present anywhere on the citation.

I do not see the words no driver present on the citation.

yeah it says it right there in the comments. No driver

none of the kids are wearing coats?!

Its a no standing zone

Sunday is NOT a school day and should be allowed to park then..

The traffic agent has no common sense. Is all about numbers for the city. That’s how the city makes money. Shame on them.

He works for D’Blasio. The mayor requires the cop to fulfil his quota. He has got to house and feed the homeless! Now you will feel a bit better next time you get a ticket! It goes for a worthy cause!! ;);)

by the way. the traffic agent is an idiot because…. the reason there are no parking signs in front of schools is because there should be room for the school buses to park in front and pick up/drop off kids. you dont want the buses dropping kids in the middle of street cause its dangerous and it blocks traffic, you want the bus to drop off directly on sidewalk in front of the school

No driver in bus. The bus was parked. School buses are not above the rules even in special borough park!

Expeditiously implies speedily like if a parent was picking up some children and stops in the no parking zone with the motor idling while the children open the car door and jump inside. It might not apply to a commercial vehicle/school bus.

I’m reading the comments and a lot of idiots who agree with this traffic agent missed the whole point of no standing during school hours. That’s soley so that the buses can pull up and safety load kids without pedestrians in those spots. Smh liberal America has…. Everyone wants to play both sides of the fence. That traffic agent is a bully who probably got picked on in school and will never become a real cop so he’s mad. I feel bad for his wife and kids

Being a proud sutherna, this reinforces our belief that all Yankees are inconsiderate an down right pricky! Lol

See all the ticketless cars in front of public schools blocking the street. I am sick of the quotas!

You’re supposed to juice the guys you gotta juice.

Anti-semitism is written all over his face!

The ticket would easily get thrown out.

Report the Brownshirt to Internal affairs.

No common sense…That’s the problem with this new generation..

If the driver was not in his seat, the bus was parked. Had a similar situation like that in Chicago with a charter bus.

who pays tickets anyway.
I also think these buses have season tickets

the guy is a Muslim from Bangladesh.

torah talmud is a legitimate school therefore this police officer is in the wrong. no parking applies to regular drivers not school buses. where do you park a 40 foot long bright yellow bus? certainly not in the parking ramp. smh

Thats a no standing ticket

The City is willing to take the chance that the vehicle owner will appeal the ticket, or maybe he won’t. They have absolutely nothing to lose. The city takes the odds that the owner won’t appeal and just pay the fine.