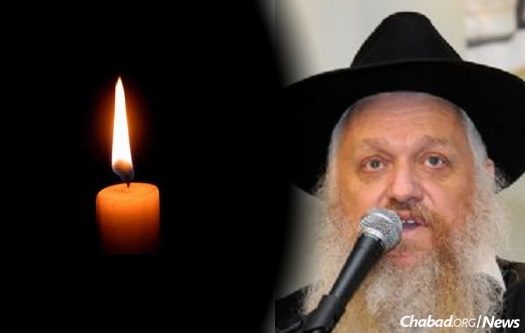 Rabbi Avrohom Cohen, who served Jewish immigrants from the former Soviet Union and established the first Chabad-Lubavitch synagogue in Beersheva, Israel, passed away on Dec. 21. He was 64 years old.

Cohen was born in Jerusalemin 1954. He began studying Chassidic thought as a teenager with Rabbi Shabtai Slavaticki, today a Chabad-Lubavitch emissary in Antwerp, Belgium. He later studied with Rabbi Yosef Tzvi Segal, head of Chabad’s Kolel Tzemach Tzedek in Jerusalem, before enrolling in the Tomchei Tmimim Yeshiva in Kfar Chabad, Israel, where he was guided by the noted Chassidic mentor, Rabbi Mendel Futerfas.

He then studied at the Central Lubavitch Yeshiva at 770 Eastern Parkway in the Crown Heights neighborhood of Brooklyn, N.Y.

After his marriage to Nechama Stambler, daughter of Rabbi Meir Tzvi and Devorah Stambler of Kfar Chabad, Rabbi Cohen was sent by the Rebbe—Rabbi Menachem M. Schneerson, of righteous memory—to Beersheva to serve Jewish immigrants from Russia. Cohen served in the Israel Defense Forces’ Artillery Corps and then in the military rabbinate. While in the army, he and his wife gave Torah-study classes and arranged for mezuzahs to be affixed in the homes of the many recent immigrants from the former Soviet Union who were settling in the desert city.

After his discharge from the army, Cohen founded the first Chabad shul in Beersheva, which was to be the beginning of the large network of Chabad centers and educational institutions in the city, led today by Rabbi Zalman Gorelick.

Cohen had been ill in recent months, but was able to participate in the wedding of his daughter a week before he collapsed in his home and passed away.