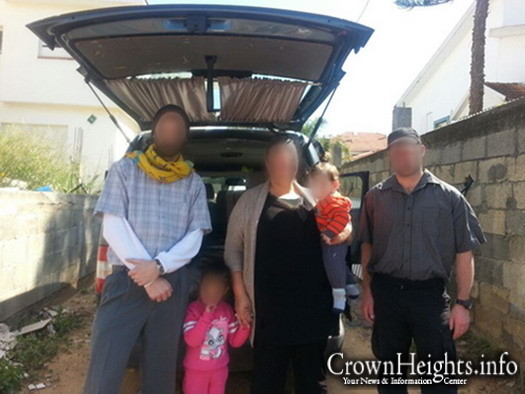 The rescue ran aground even before it started when, just hours before Yad L’Achim teams were set to arrive on the scene, a tearful Ahuva called with terrible news: Her husband had been arrested by the police on suspicion of belonging to a car-theft ring and was confined to house arrest. The plan called for the rescue to take place when he was away at work, but now he couldn’t go to work.

After a series of security consultations, Ahuva was asked to notify Yad L’Achim when her Arab husband was to be taken to the police station for questioning. Late one night, after three nerve-wracking days, the Ahuva’s mother called Yad L’Achim with the following message: My daughter informed me that her husband is to be taken tomorrow at 7 a.m. for questioning in a Jerusalem police station.

Yad L’Achim sprang into action, alerting the rescue team in the middle of the night. At dawn, the team was already waiting at the entrance to the village and making last-minute preparations to rescue Ahuva and her children.

But then another complication arose: The mother of the Arab husband showed up at the house and tried to prevent the police from taking her son in for questioning. She screamed and carried on, cursing the police and physically trying to block them. Even after the police left with her son, she remained at the house.

The rescue team, which during the pre-rescue briefing had learned that she was a terrorist who had killed Jews and was released from Israeli prison in the deal that gained the release of IDF soldier Gilad Shalit, decided not to risk a rescue in her presence.

However, the rescue team decided to remain in the area, despite the danger. Half an hour later, Ahuva called and notified them that her mother-in-law had left the house, but had taken her young son with her. Again, the rescue would have to be delayed.

However, they continued to drive around in the heart of hostile territory in the hope of some sudden development that would make a rescue possible.

Ten minutes later, the hoped-for news arrived: Ahuva’s young son was returned home by his grandmother “because he cried all the time.” The rescue team immediately made its way to the house, ushered Ahuva and her children into the car and sped out of village en route to a secret safe house, where they are undergoing rehabilitation.

“We thank Hashem that we merited our own Purim miracle and saw how everything was directed from Above,” said a member Yad L’Achim’s rescue team. “We had Divine assistance every step of the way.”