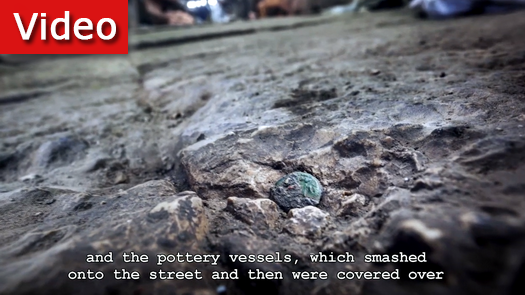 After six years of extensive archaeological excavations led by the Israel Antiquities Authority, a 350-meter-long section of the Pilgrimage Road was unveiled at a festive ceremony in the City of David. The project was funded by the City of David Foundation who plan to open up the site to the general public in the near future.

Archeological discoveries and extensive research were presented for the first time, demonstrating that contrary to what was once believed, the residents of the City of David or what Josephus referred to as Lower Jerusalem from the Second Temple period were quite affluent.

According to Dr Joe Uziel, Uri Levi, Nachshon Tentun and Moran Hajbi who oversaw the excavations on behalf of the Israel Antiquities Authority:

“The impressive street and the buildings that were exposed along its length testify to the fact that a wealthy population lived here, the most significant discoveries that contributed to this understanding were publicly shown for the first time during the inaugural event, including broken parts of an ornate stone table, an additional round table made of bitumen stone decorated with colored stones in its center.”

These are just some of the many tables discovered in the excavations, that were overseen by researcher Frankie Schneider.

A number of silver coins were found nearby, most notably silver coins minted in the city of Tire in 33CE and which, according to testimony in the Talmudic Tractate of Bechorot, were used as Half Shekel Temple tithes during the late Second Temple period.

A variety of jewelry was unearthed, including a ring with a precious stone that was discovered inside a ritual bath, and pottery vessels and vials that were used to store perfume or oils.

The total length of the street that connected the Pool of Siloam in the south of the City of David to the foot of the Temple Mount is 600 meters long and approximately 8 meters wide. To date, the southern part of the street has been exposed to a total length of 350 meters. The magnificent street was paved with large stone slabs – as is customary in monumental construction throughout the Roman Empire.

The discovery of the street combined advanced and pioneering research methods, which strengthened the understanding that King Herod the Great was not solely responsible for the huge construction projects of Jerusalem at the end of the Second Temple period. As recent studies indicate that the street was built after the reign of Herod, probably during the time of the Roman procurator Pontius Pilate, who is also known to have sentenced Jesus to crucifixion.

According to the researchers: “This conclusion, in fact, sheds light on the history of Jerusalem in the late Second Temple period, and strengthens the recognition of the importance of the rule of the Roman procurators in shaping the image of Jerusalem.” From ruins found in a layer of ash from the time of Jerusalem’s destruction throughout the street, valuable information was derived about its history, as well as the dietary regime that was practiced in the besieged city during the uprising. 2000 years after the destruction of Jerusalem, we have managed to go back in time and actually touch the last moments of the city before it was destroyed.”

According to Dr. Yuval Baruch, archaeologist of the Jerusalem area at the Israel Antiquities Authority, “Today, for the first time, one can walk along one of the main streets of ancient Jerusalem, get an impression of its sights and receive answers to fascinating historical questions that have been asked for more than 100 years about the history of Jerusalem during the Second Temple period. This is a natural continuation of the previous archaeological excavations at the site, which were begun by European and American researchers at the end of the 19th century.”

“The results of these excavations determined for the first time that the biblical City of David was located on the eastern hill of Jerusalem, the capital of King David, where the administrative institutions of the Kingdom of Judah were concentrated. During the Second Temple period, the area was included within the boundaries of the extended city – a neighborhood called the Lower City.”

“Among the important findings that were discovered then were sections of the stepped stone street from the time of the Second Temple, built over 600 meters from the city’s southern gates and the area of the Shiloah Pool, up north towards the Holy Basin. Six years ago we renewed archeological excavations along the street, and it was exposed in all its glory to the benefit of the thousands of visitors who could walk there. ”