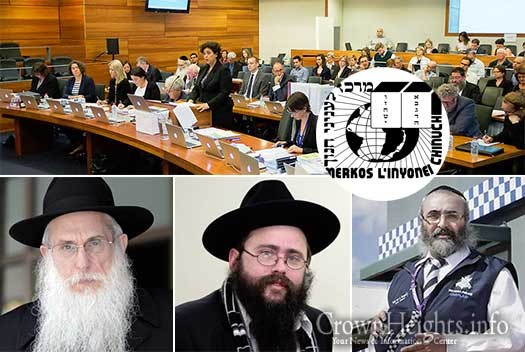 A statement from the board of Merkos L’Inyonei Chinuch was released in light of the shocking and troubling testimony that was presented to the ongoing Royal Commission on child abuse in Australia. “We are appalled and deeply pained to learn of the allegations,” reads the statement, which comes on the heels of local rabbis issuing a video statement expressing solidarity with the victims and a third rabbi stepping down.

This statement comes after shocking testimony that has been given before the Royal Commission into Institutional Responses to Child Sexual Abuse by a number of victims, as well as by Chabad rabbis serving in communal and educational roles.

Some of the testimony can only be described as shocking – both by the scope as well as the by gravity of the accusations – only to be compounded by alleged inaction by community leaders.

The commission was appointed in 2013, and is tasked with leading an inquiry into abuse across the country and in institutes of all faiths and backgrounds. Over the past week, the commission heard from members of the Chabad community in Sydney and in Melbourne.

Last week, five rabbis in Sydney released a short video message, apologizing and pledging to do more to combat CSA.

Full text of the Merkos statement:

The Board of Merkos L’Inyonei Chinuch, the educational arm of Chabad-Lubavitch, has been following Australia’s Royal Commission proceedings into Institutional Responses to Child Sex Abuse. While we appreciate the need for patience as the process takes its due course, some of the testimony which was shared with the Commission is extremely alarming, and we feel compelled to comment even before the Commission issues its findings and recommendations.

We are appalled and deeply pained to learn of the allegations against individuals associated with some of the Chabad institutions in Australia. The information that has emerged is utterly disturbing, a profound violation of the non-negotiable principles implicit– and explicit–in any and every situation where the wellbeing of a child is entrusted to the care of an educational institution.

The first, foremost and overriding concern of every one of our educational institutions, and of each individual affiliated in any way with those institutions, is the protection—physical, emotional and psychological—of any and every child entrusted to it.

We are confident that the reports emanating from Australia are the rare and unfortunate exception to our institutions; however in light of the allegations now under investigation, we are reviewing procedures and protocol to see how these can be improved and enhanced for better implementation and enforcement. Indeed, given the devastating and long-lasting effects of child sex abuse now well known, teachers, administrative and other school personnel who become aware of any incidents of such abuse, must act responsibly and report them to authorities without delay.

The unfortunate incidents alleged to have occurred in Australia may have well been avoided if the institutions in question would have adhered to the Child Safety Code guidelines of the Merkos Educational Office. We will therefore take additional steps to ensure strict adherence of these codes by all Chabad-Lubavitch educational institutions, and we will continue to explore additional measures to raise awareness among school personnel, about the dangers, risks and indications of offenses of sexual abuse and misconduct.

We commend the efforts of the Royal Commission, and trust that their involvement in this matter will not only address the immediate situation, but that they will provide broader recommendations as well that will be instrumental in ensuring a safe, sound and positive environment within all schools. We welcome and value their insight.

The decision on the part of the victims to come forward cannot have been an easy one. But it was the courageous and correct one. For in their willingness to do so, they have contributed to a heightened awareness that will prevent other children from falling victim. The suffering and consequences of such abuses are often life-long, and as such, every instance of prevention is a life saved.

In our ethos, every life is a world. Every child represents a world, worthy and deserving of our greatest investment towards their safety and nurture. The victims who have stepped forward to report abuse have surely saved many, many lives, each of them a world unto itself. For this, we applaud them. We pray that they will find healing and the strength to move on. G-d bless them with goodness and kindness.

An earlier version of this article incorrectly stated that Rabbi Avrohom Glick recently resigned amid the commission hearings. He in fact proactively stepped down from his position two years ago, and the article has been corrected to reflect that.